I mock a 12-team, .5PPR snake draft, picking No. 12 overall, and explain the thought process behind each pick.

As the calendar continues deeper into July, I often enjoy running a few fantasy football mock drafts to see how things are playing out currently. It’s one thing to write and read a bunch of fantasy football content and rankings, it’s a whole other thing to actually get in the thick of a draft.

I plan on doing a few of these over the coming weeks using FantasyPros’ mock draft platform. This is a .5PPR, 12-team snake draft for those keeping track at home.

So far I’ve drafted with the first overall pick and the sixth pick (smack-dab in the middle of the draft). This time, I’m picking at the end of the draft. So without further ado, here’s how my draft played out.

1.12 RB Austin Ekeler: This pick came down between Ekeler and Nick Chubb and I trusted my rankings and went with Ekeler. While Chubb is easily the better runner, he sees quite literally zero of the passing work in the Cleveland Browns’ offense with Kareem Hunt sharing the backfield. Meanwhile, Ekeler is primed to be a three-down back in LA and I’m fairly confident he’s going to post 2019 numbers—in which he finished as the RB6 in .5PPR—in 2021.

2.01 TE Travis Kelce: Since I knew I was going to miss out on a lot of the top talent given picking last, I went ahead and spent early on tight end to give myself the biggest advantage there. Kelce has finished the TE1 in each of the last three years which is utterly insane.

3.12 RB Chris Carson: I snagged Carson in my last mock draft as my RB3 but I’m still happy to have him as my RB2. The perpetually underrated Carson finished as the RB13 in .5PPR points per game last year. As long as he’s healthy, he has a vice grip on the Seahawks’ backfield.

4.01 WR Amari Cooper: Cooper in the fourth is a steal and probably my favorite pick of this mock. Through the first four weeks of last year when Dak Prescott was healthy, Cooper was the WR3 in .5PPR. THE WR3. I drafted him as the WR14. CeeDee Lamb went ahead of him which honestly shouldn’t happen no matter how much hype there is surrounding Lamb.

5.12 WR Diontae Johnson: I thought I was going to be toasted at WR (hence why I went Kelce early) but Cooper plus Diontae Johnson as my top two wide receivers is sheer beauty in my mind. Johnson had some serious dropsies last year but still led the Pittsburgh Steelers in targets with 144. I expect a normal offseason to correct his drops and just that alone should rocket him into high-end WR2 territory (he finished WR23 in .5PPR even with all the drops last year).

6.01 RB Damien Harris: Everyone is sleeping on Damien Harris this year. The man is the clear RB1 in his backfield, on a team that wants to run the football. Harris averaged 5.0 yards per carry last year and was explosive all over the field. I expect his workload to be larger in 2021 but his efficiency to remain the same playing behind one of the best offensive lines in the NFL. Love this pick.

Looking for players to trade for in your #dynasty leagues?@petemrogers, @NFLClark & @Ginger__Nic give a handful of buy low targets on this week's podcast.

7.12 RB James Robinson: We all know what Robinson did last year and if it weren’t for Travis Etienne, he’d easily be a top 10 running back again this year. It seems the Jacksonville Jaguars are trying to recreate the Browns’ backfield with Robinson as their Chubb and Etienne their Hunt. I’m ok with that. Getting a back who could see around 15 carries a game and all the red zone work in the seventh round is good value in my book.

8.01 WR D.J. Chark: I guess I’m a fan of the Jags offense this year. We’ve seen Chark be a dominate WR before and with Trevor Lawrence under center this year, hopefully he’ll return to that form. Looking over my roster now, I definitely am taking risks at the WR position but I’m ok with that given how many good options there are out there and likely on waivers.

9.12 RB Tony Pollard: Pollard had a sneaky good season last year and from Week 11 onward, he was the RB23 in .5PPR. Now I think Ezekiel Elliott has THE RB1 potential this year so clearly I’m not picking Pollard to replace Zeke. But I think Pollard carved out a larger role for himself in this year’s Cowboys offense and he’s more than a worthy handcuff to have.

10.01 WR Jaylen Waddle: Taking a flier on the rookie speedster to hit the ground running playing with his college quarterback again in Miami. Waddle isn’t being talked about with the other top rookie receivers because there’s uncertainty around Tua Tagovailoa and what Waddles role will exactly be. Still, elite elite speed has a tendency to make plays and I’ll spend a 10th on that potential.

11.12 WR Henry Ruggs: Take basically everything I said about Waddle and apply it to Ruggs. But what Ruggs has that Waddle doesn’t is a) a quarterback in Derek Carr who’s proven to be a successful deep ball thrower and b) no real other wide receivers in front of him. The Las Vegas Raiders took Ruggs over Jerry Jeudy and CeeDee Lamb to be their WR1. We should see that this season.

12.01 D/ST Los Angeles Rams: Spent early on defense to make sure I got the very best, but also because I wanted to see what QBs would be available to me very, very late.

13.12 QB Kirk Cousins: Shit on Kirk Cousins all you want, the man consistently puts up solid fantasy numbers. Since joining the Minnesota Vikings, Cousins has finished the QB11 (2020), QB15 (2019), and QB13 (2018). He now has the best group of pass catchers he’s ever had and I’m drafting him to be nothing more than a secure, weekly top-12 finisher.

14.01 QB Trey Lance: Here’s where the real fun is. Cousins is the security blanket until Lance takes over the San Francisco 49ers offense. Then, this team is Lance’s. Nic has Lance ranked his QB9 this year and while I think that’s too high, I certainly see the immense upside Lance has in Kyle Shanahan’s offense.

15.12 K Ryan Succop: He’s a kicker on an offense that’s likely to score a lot of points. Perfect!

Here’s how the whole draft played out: 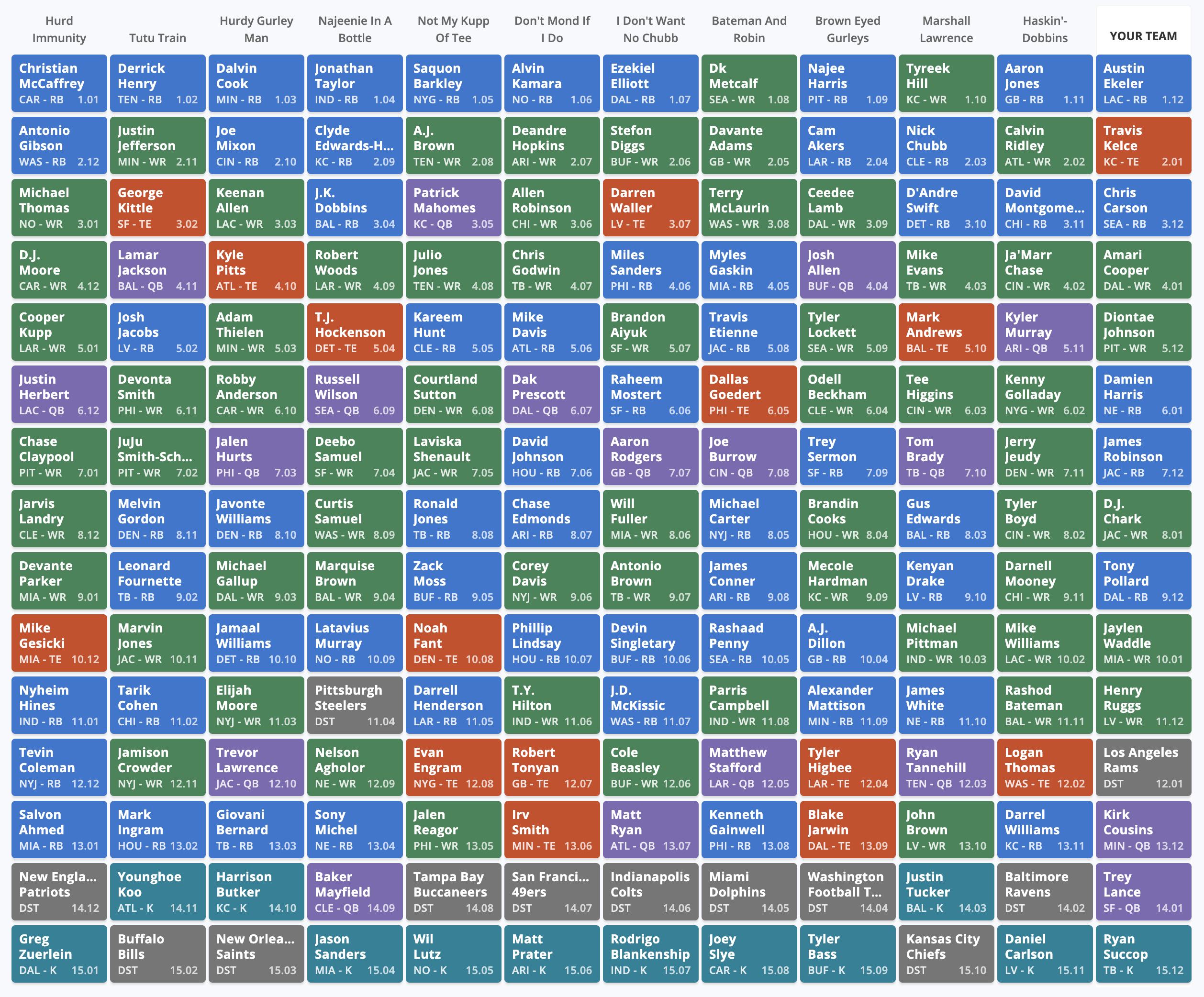