Which wide receiver are you drafting in fantasy football this year at the middle of the fifth round: Michael Thomas, Mike Williams, or DJ Moore?

Fantasy football drafts are all about maximizing value at each spot, whether that means reaching for your guy or picking that stud who looks to be falling for no obvious reason. In this series, I’ve taken a look at groups of three players with similar current ADPs and have selected the one I’d be picking if it was me on the clock.

Williams has a proven commodity in a high volume passing offense that I am projecting to be the best in the NFL in 2022. Williams is no longer the WR2 to Keenan Allen’s WR1 in the Chargers’ offense and is coming off his most productive fantasy season as a pro. He finished as the WR12 in 2021 in .5 PPR scoring. Using our NECC rating, Williams finished last year as the WR6, and is the WR17 over the past 3 years. He was also the WR17 using our comparative PER metric, showing he holds his own when every fantasy receiver is equalized based on targets. All upward pointing statistics when paired with an ascending quarterback in Justin Herbert.

The Chargers showed their faith in Williams, signing him to a three-year, $60m extension earlier this off season. I have taken Williams as my WR1 in more than one draft, and when I’ve stacked him with Herbert, I know my fantasy team is in safe hands in 2022.

Thomas is a quintessential enigmatic boom or bust play in fantasy this year. We haven’t seen a full season from Thomas since 2019 thanks to that lingering ankle issue that kept out of the 2021 season completely. Prior to that injury however, Thomas was a top-10 fantasy receiver for 4 straight years, peaking in 2019 where he finished as the WR1.

His appearance at training camp however has answered many questions about his health for the upcoming season. With him seemingly being full go it makes him an intriguing pick for the season ahead. Thomas steps back into the No. 1 receiver spot for the Saints, who, with a healthy Jameis Winston throwing the ball, gives Thomas the opportunity to be a factor in fantasy in 2021. I was taking Thomas in drafts when his value was a couple of rounds lower, but now he’s going in the fifth round it’s giving me pause and I’m happy to let others take the risk on the Thomas renaissance.

I have been a huge fan of Moore since his rookie season, and still feel he has the potential to be a WR1 in fantasy. However his fantasy ceiling seems to be constantly stagnated by underwhelming quarterback play. Using my QB Index, Moore has never had a quarterback that has finished higher than the QB13, and that was Cam Newton in Moore’s rookie season. Since then he’s had the QB37 (Kyle Allen), the QB18 (Teddy Bridgewater) and then last year the QB37 (Sam Darnold) and QB39 (Newton). Not exactly the stellar play his first round draft stock deserves.

Moore’s NECC rating places him as the WR45 over the past 3 years, between Antonio Brown and Marvin Hall, with his 2021 rank seeing him as the WR62, but I see this as a function of the passer rather than Moore’s talent as a pass catcher. I also worry about his touchdown production as he has had no more than four touchdowns in any of his first four years.

Flash forward to 2022 and we have a quarterback battle between Darnold and the likely Week 1 starter Baker Mayfield. Mayfield himself has flattered to deceive in his four years in Cleveland, finishing no higher than the QB13 as a rookie, with ranks of 32, 19 and 30 over the past three years in QPI. Again, this makes me nervous about Moore’s ceiling for fantasy production.

If you squint, you may see a Mayfield revival season coming, and Moore—along with Christian McCaffrey—would be the main beneficiaries of that. For now though, Moore is the third choice of these three players if I’m on the clock.

Considering these three players are going at almost exactly the same ADP at the current time, I don’t think this is a particularly close call.

Tip the Author
Become a Patron! 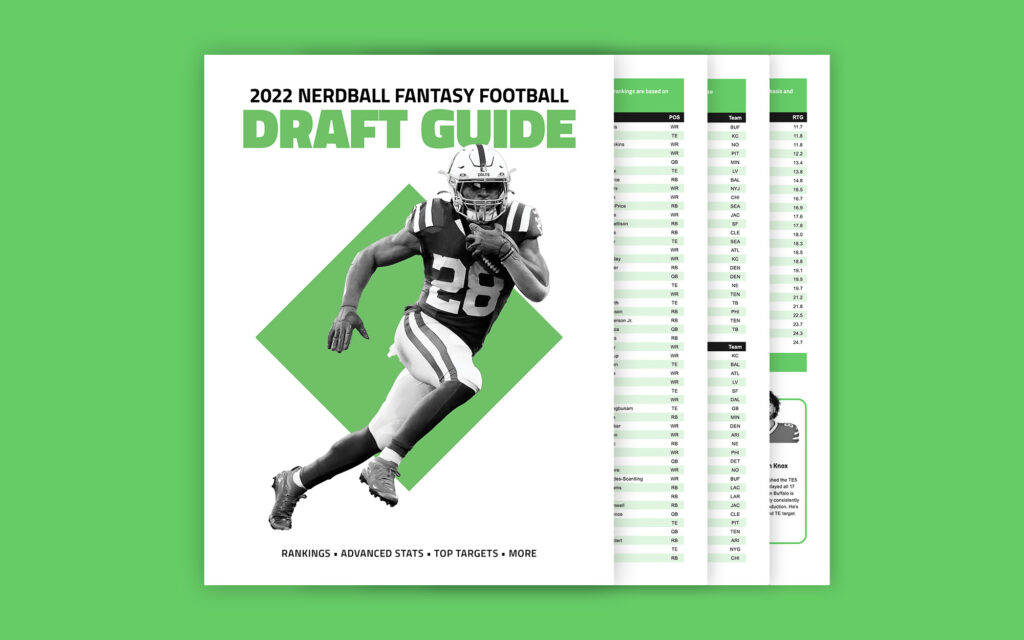 Javonte Williams Is a High-Risk RB1 in 2022 Fantasy Football