I did a 12-team, PPR snake fantasy football mock draft, picking No. 4 overall, and explained my thought process behind each pick.

I’ve been in dynasty fantasy football mode for months, but now it’s time to put that aside and start thinking about redraft. This is a PPR mock draft, hosted by FantasyFootballCalculator.com. I landed the N0. 4 pick and went through a 15 round, 12 team mock.

Here’s how the draft played out and my thoughts on each pick.

Christian McCaffrey and Johnathan Taylor will be the first and second players taken in most drafts and for good reason. After that, things get interesting…

Should I take a wide receiver? Maybe you’re one of the few who remember Derrick Henry leading the league in fantasy points (yes, even in PPR) before his injury last season?

In this draft, I picked perennial fantasy stud Dalvin Cook.

Under the defensive-minded (read, offense-averse) former Vikings head coach Mike Zimmer,  Cook was one of the most productive backs in fantasy year in and year out.

We’ve seen story after story about players buying in to the new, high-flying offensive mindset brought to town by first-year head coach Kevin O’Connell (here is an excellent article from Caio Miari of thescore.com). If the new regime pushes the offense, even a little, Cook could have a far and away No. 1 overall season.

Alternative pick: Derrick Henry – King Henry. That’s about all I have to say about that.

Dobbins is off the PUP and poised to lead the Ravens backfield alongside Lamar Jackson. I sometimes under-account for injuries (be warned), but I’m happy to take the shot on a player who I think can be one of the best backs in the league.

I was sad that Saquon Barkley went one pick ahead of me as I would have preferred Barkley here.

Alternative pick: Leonard Fournette – Fournette almost made it back to the in the 3rd round, and I would have stared RB-RB-RB if he had. Fournette may not be as exciting as Dobbins, but Lenny’s floor is, what, RB8?

Andrews was a pretty easy choice for me here. I believe in getting one of the big-4 tight ends to set yourself apart from your opponent each week, and Andrews is second only to Kelce in that regard.

The top-shelf running backs were off the board, only Zeke was left to tempt me. I look at who went after my pick, and I don’t feel like I missed out on anyone.

Really surprised Waddle was still available here. Going into the NFL season fans, analysts, and even fanalysts have to put their foot down on certain questions. One of big questions going in to 2022 is “Do you believe in Mike McDaniel and Tua Tagovailoa?”

Waddle’s rookie season was exceptional. His WR12 finish aside, he looked uncheckable week after week.

Alternative pick: George Kittle – Kittle going so late is the only reason not to pick Andrews or Kelce.

I don’t expect Thomas to remain this low in ADP. His days as THE WR1 may have left town with Drew Brees, but Thomas is absolutely in the conversation to finish as A WR1.

I don’t expect him to remain in the fifth round for much longer now that we’re seeing him run around unencumbered in training camp.

Alternative pick: A.J. Dillon – The Packers’ backfield may lead the league in fantasy points scored. Don’t let a time-share with Aaron Jones scare you away from Dillon in the fifth.

Another surprise wide receiver falls to me here. I think Robinson and Kupp are both poised for WR1 finishes in the hard-charging Rams offense.

Perhaps the people who think Robinson is over the hill will end up right, but I’d have taken him in the fifth if Thomas had been off the board.

Alternative pick: Darnell Mooney – Its hard to put too much faith in the Bears offense, but Mooney and Montgomery seem like mid-range sure-things for 2022.

Stafford’s elbow injury is a concern, but getting the cheap Robinson-Stafford Rams stack without having to force it, I’m pretty happy with that.

I’ll note here that Stafford went off the board to me as the QB8. While I’m happy with that as far as ranks go, watching Russell Wilson fall to the QB10 (Round 7, pick 12) and Trey Lance fall to the QB15 (round 11, pick 2) hurt a little bit.

Alternative pick: Russell Wilson – I’m not trying to be QB-centric with this pick, but Stafford, Rodgers, and Wilson going off the board here look like the best values in the round.

JuJu falling this far is something I simply do not understand. I’d be happy taking Smith-Schuster in the late fourth.

Alternative pick: Zach Ertz – Ertz is the only TE outside the big four (Kelce, Andrews, Kittle, Pitts) worth drafting. With his ADP is so cheap and his almost assuredly finishing inside the top six at the position make him an excellent ‘oh crap I missed on the top four’ alternate.

The Bills showed they were unhappy with their running back situation this offseason, going after J.D. McKissic then drafting James Cook late in the second round of the NFL draft.

While Cook may start slow and could even stay in a limited role all year, he could also end up as the featured pass-catching back on a pass-first team which also happens to be one of the most explosive offenses in the league.

Alternative pick: Brandon Aiyuk – Aiyuk may be your saving grace if you get to this part of the draft and still need a starting receiver. Aiyuk already sorta-kinda broke out as a rookie, scoring the 19th-most PPR PPG as a rookie in 2020. Trey Lance and Aiyuk are already muy simpatico if you listen to the Niners camp reports, too.

I’m really happy with my WR corps, and so I’m just pounding running backs here. Pierce may end up being just a guy, but there is little competition in front of him in the Texans backfield.

Kadarius Toney went one pick before Pierce, broke my heart.

Alternative pick: Chris Olave – Olave is a Matt Waldman favorite who lands in perhaps the best situation as far as opportunity aligning with skill set. Betting on rookie wide receivers is a perilous venture, but Olave is the rookie receiver to bet on this year.

Spiller is expected to give Austin Ekeler a break with some of the heavy lifting in the high-flying Chargers offense. I don’t expect him to push Ekeler for touches, but this could end up being a nice flex in the best of times, and a smash-start if Ekeler misses time.

Yep, continuing to pick up high-upside running backs here. The San Francisco backfield isn’t settled even though Elijah Mitchell should start the season as ‘the No. 1’. The Niners are still obviously looking for someone to run inside, and San Fran is an offense I want to bet on this year. It may not work out, but the potential is there in spades.

Getting the starting Dolphins running back this late in the draft feels like stealing.

Alternative pick: Isaiah Pecheco – Pacheco doesn’t have an insurmountable depth chart ahead of him, and the camp-buzz for the rookie 7th rounder is starting to pick up momentum.

I’d advise skipping kicker and defense if you’re drafting this early and don’t HAVE to pick one. But, in keeping with the spirit of the exercise, I take a PK on a team I expect to score a whole lot.

The Broncos kick off the season, in prime-time, against the lowly Seattle Seahawks. I expect that matchup to give the Monday Night Football crew plenty of time to discuss what we see in Week 1 as this one might be over pretty quick, which bodes well for DST scoring.

Here’s the full draft in all its glory: 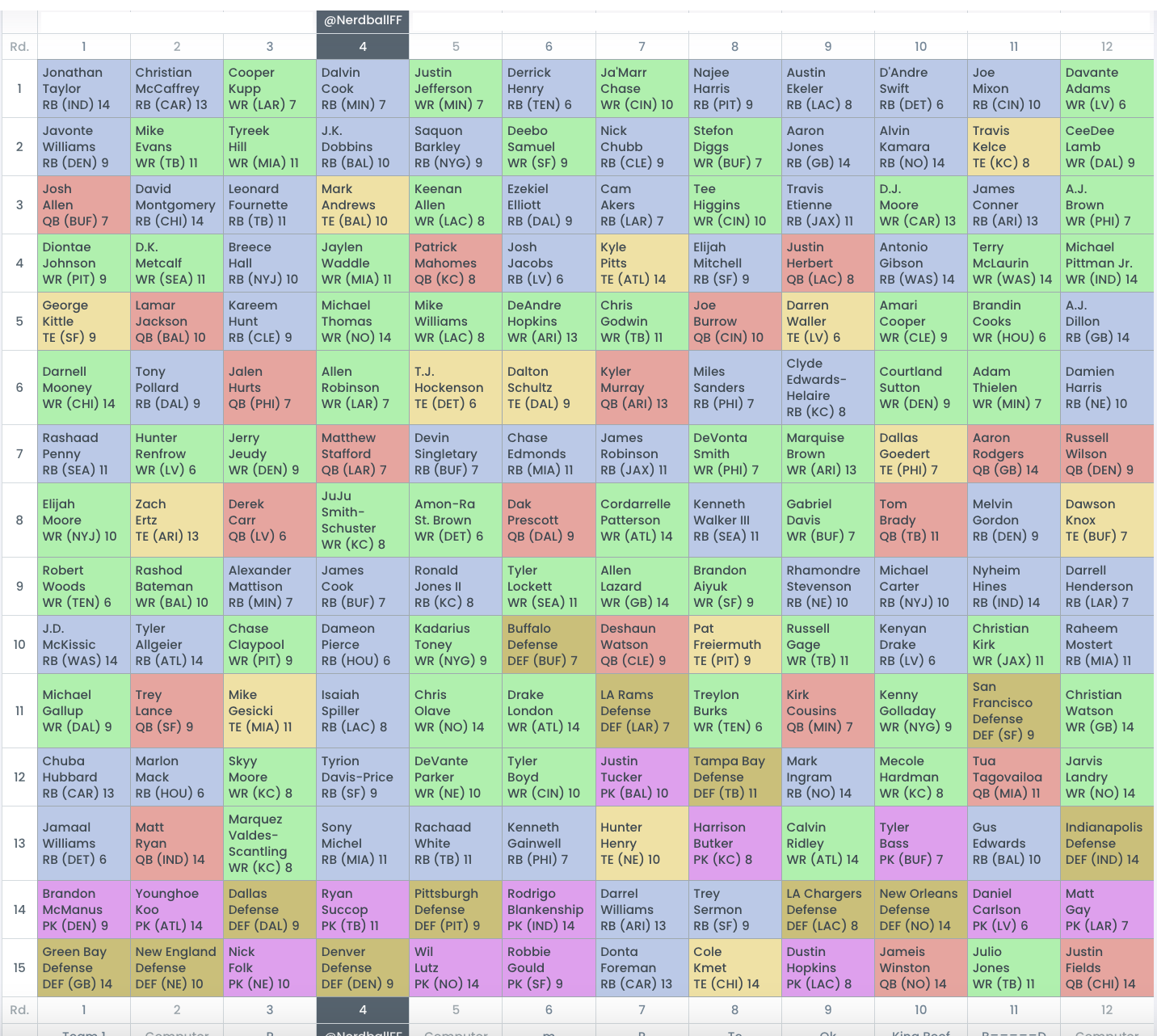