Trust Kyler Murray this week, even in a tough matchup vs the Patriots. Using NECC consistency rating to identify starts & sits for Week 14 fantasy football.

There’s always risk in fantasy football. You’re never certain in the performance you’re going to get from a certain player when you start them. In order to help you make the best start/sit decisions for your fantasy team this week, I’ve used our NECC consistency rating to chart the safest and riskiest starts for Week 14.

I’ve charted every position’s NECC rating over their .5PPR points per game to help visualize who are safe and risky starts this week. The chart is hard to read but never fear, I’ve highlighted a few high-risk, mid-risk, and low-risk starts for Week 14. Feel free to do your own digging with the stat and use it when making your own start sit decisions. 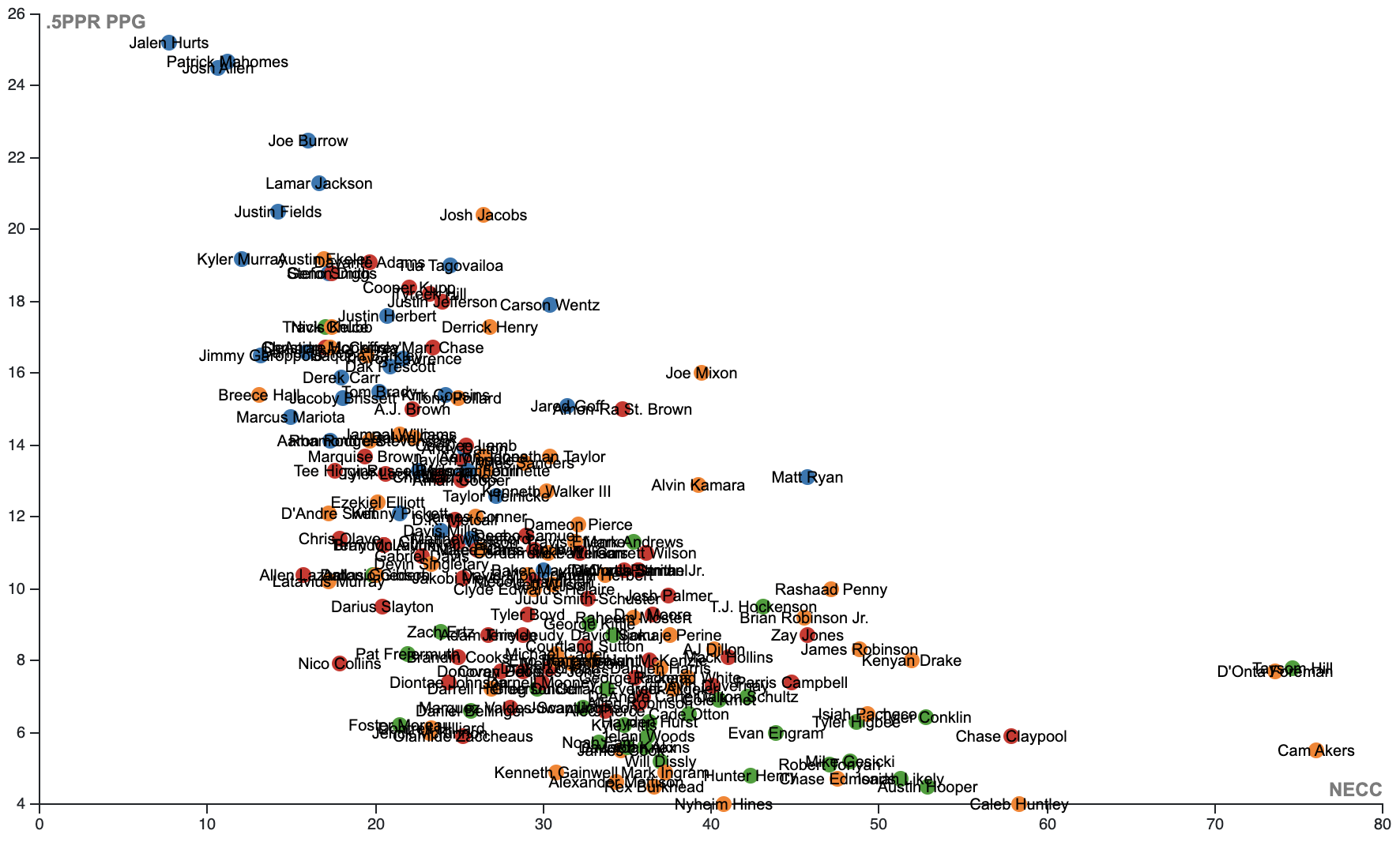 It’s either a really good thing or really bad thing if your name is clearly visible on my NECC chart. In Akers’ case, it’s a bad thing. This season has not been kind to the Rams as a whole, but specifically unkind to Akers. He’s failed to log more than 61 yards rushing in a game this season and only once has produced a RB2-plus finish. That finish was last week in which he scored two touchdowns and finished the RB7.

There’s reason to be optimistic about starting Akers this week. Last week did mark the first time this year he’s played over 50% of offensive snaps and he handedly led the backfield in touches. If this is the role he’s to see moving forward, he should be in for a good game this week. The Raiders are giving up the third-most PPG to opposing backs this year (28.03). But do you trust Akers to now suddenly be the Rams’ workhorse back? Color me dubious.

Consistency has not been Moore’s issue this season. Only once has Moore seen fewer than six targets in a game and his 24.4% target share is ranks 9th among WRs. It’s what he’s done with those targets that’s been wildly inconsistent. He’s seesawed between being an elite WR1 and being barely startable. Can you really blame him though given the revolving door at QB in Carolina?

The Seahawks were a tough matchup to start the year, but over the last four weeks they’ve surrendered the seventh-most WR PPG (38.8). They rank in the bottom half of NFL pass defenses per NEFF rating (20th). It’s a matchup Moore could take advantage of—the Hawks have given up at least one WR2 performance in two of their last three games—but his season has shown us that’s not a sure thing. Consider him a volatile WR2 this week.

Oh man Etienne managers were cocky after his first three games starting. I can say this because I am a Etienne manager and I was very cocky. Etienne was the RB3 in .5PPR between Weeks 7 and 9 and looked to be a league winner at the RB position. Since then, he’s been the RB51. Yikes.

The Titans are a brutal matchup to get back on track against as they rank No. 1 in run defense NEFF rating and rank seventh in RB PPG (19.4). Still, we’ve seen Etienne put together elite RB1 performances against elite defenses and his 56.8% opportunity share ranks inside the top-20 among RBs. I’m starting him this week in my flex.

This season, Cooper has either finished a clear WR1 or a complete bust, with very little in-between. He has five WR1 finishes, four finishes outside the top 50, and three WR2-WR3 weeks. His first game with Deshaun Watson under center left plenty to be desired as he only finished with 40 yards on 4 catches despite being targeted 9 times. That’s to be expected though as the two build chemistry and Watson remembers how to play football.

The Bengals will be a tough defense to work through chemistry issues against. Their secondary as been one of the best this season, ranking inside the top 10 of pass defense NEFF rating. They’ve allowed the fourth-fewest WR PPG both on the season and over the last four weeks. Only the Texans have surrendered fewer touchdowns to wideouts this year.

Only once this season has Murray finished outside the top 14 any given week. That was back in Week 3 vs the Rams when he still managed to throw for 314 yards and finish QB23. Outside of that, you’re getting a sure-fire QB1 week-in and week-out with Murray. So why even bother mentioning him?

The Patriots’ defense has the third-most sacks (39), fourth-most takeaways (19), allowed the seventh-fewest PPG (18.8). They’re the third-best defense in the league this year per NEFF. They’re coming off a week in which they held Josh Allen to one of his worst fantasy performances of the year. All that being said, they do have a weakness against mobile QBs, surrendering the eighth-most rushing yards this year (290). Murray’s consistency plus his ability to run makes him a safe start despite the tough matchup.

Just because I think it’s hilarious, here’s Moreau’s yardage totals since Week 8: 31, 42, 43, 33, 33, 32. It doesn’t get much more consistent than Moreau this season. He’s also sprinkled in a few touchdowns during that time for good measure. If I had to bet, Moreau is going to have 35 yards and a touchdown Thursday night vs the Rams. The Rams have allowed the second-most fantasy points to TEs over the last four weeks (18.5). They’ve also surrendered the most red zone targets to the position with 10. Like I said, 3oish yards and a touchdown feels like a lock for Moreau this week.