Welcome for many to the fantasy playoffs! There’s always risk in fantasy football, especially come playoff season. You’re never certain in the performance you’re going to get from a certain player when you start them. In order to help you make the best start/sit decisions for your fantasy team this week, I’ve used our NECC consistency rating to chart the safest and riskiest starts for Week 15.

I’ve charted every position’s NECC rating over their .5PPR points per game to help visualize who are safe and risky starts this week. The chart is hard to read but never fear, I’ve highlighted a few high-risk, mid-risk, and low-risk starts for Week 15. Feel free to do your own digging with the stat and use it when making your own start sit decisions. 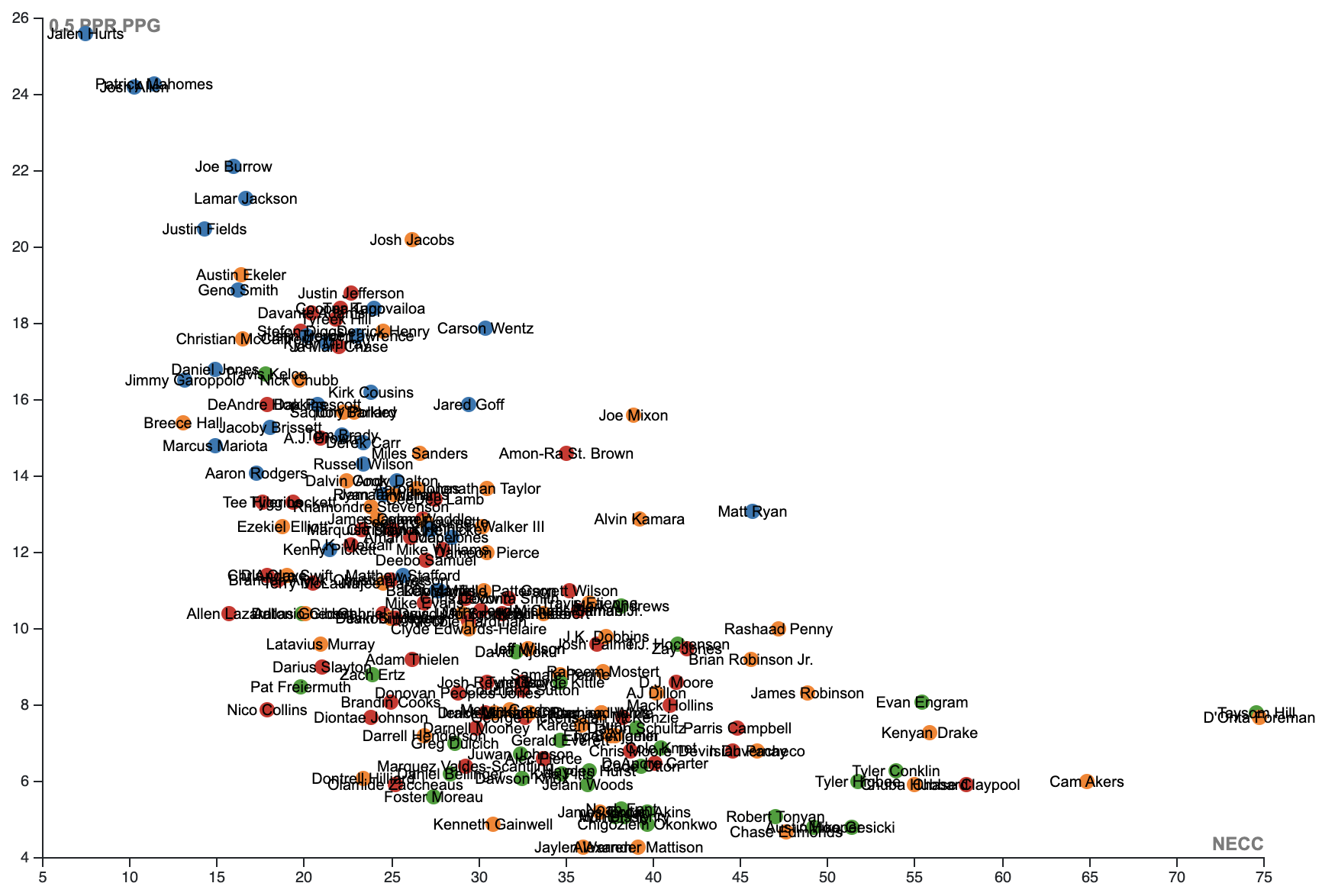 Pacheco has a high NECC rating simply because his season has been a tale of two halves. To start the year he was a role player, rarely seeing the amount of work to sustain solid fantasy production. Then in Week 10 he took over the Chiefs’ backfield and since then has seen a 61% opportunity share and much more consistent play. He’s received double-digit attempts in every game over the last five weeks, only once having fewer than 14. He also hasn’t had fewer than 66 yards rushing during that time.

Don’t worry about Pacheco’s previous volatility this week. The Texans’ run defense ranks dead-last in fantasy points (29.5 PPG), attempts (363), rushing yards (1,835), and touchdowns (16) allowed to opposing backs this season. Given Pacheco’s usage over the last month, he’s a sure-fire RB1 and a must-start for any team rostering him.

For the most part, Tonyan has been consistently a non-fantasy factor this season. Only twice has the Packers’ tight end finished a TE1, back in Week 4 and Week 6. Since then, he’s consistently been a low-end TE2, putting up not a lot of production. Still, he’s proven both this year and in the past to be a go-to red zone target for Aaron Rodgers and touchdowns obviously make all the difference in the fantasy world.

The only reason Tonyan is worth starting this week—or even mentioning in this article—is because of his matchup. The Rams over the last four weeks are second only to the Jaguars in fantasy points allowed to opposing tight ends (12.8). During that time, they’re allowing the most red zone targets (10) and touchdowns (3) to the position. If there was ever a week for Tonyan to get you a touchdown, it’s this one.

Since returning from injury in Week 7, Prescott as been the QB10 in fantasy. He’s also remained fairly consistent around that finish, with his lowest output QB18 in Week 7. Only twice this season since his return has he thrown for fewer than two touchdowns. Regardless how much the Cowboys might throw the ball, Prescott’s 0.45 PER ranks ninth among QBs, meaning he’s making the most of every pass attempt he’s got.

There should be plenty of opportunity for Prescott to show-out this week against the Jaguars. Jacksonville’s pass defense ranks bottom 10 in NEFF rating, allowing 20.7 QB PPG over the last four weeks. Since their Week 11 bye, the Jags have given up a QB1 week to every quarterback they’ve faced. Prescott is an easy play both in DFS and for your playoffs this week.

There’s no rollercoaster ride out there quite like Mike Williams. In the nine games he’s played this season, he’s finished five of them as a WR1. In the other four he’s finished below WR45. You’re either going to get a home run or a massive swing-and-miss.

After an exciting start to the season, Olave and the Saints’ offense has kind of quieted down in recent weeks. That being said, he’s still been one of the most consistent and efficient receivers in fantasy this season. Only once this season has he seen fewer than five targets, way back in Week 1. His 22.8% target share ranks well within the top 20 at WR this season. He’s also recorded fewer than 50 yards receiving once over his last seven games.

Olave’s consistency shows he should easily be able to take advantage of the Falcons’ weak secondary. On the year, Atlanta is surrendering the fifth-most WR PPG (37.5) and sixth-most yards per game to WRs (169.3). Their starting corners A.J. Terrell and Darren Hall both are allowing a passing grade north of 110 and a total of 10 touchdowns. Olave should be trusted as a strong WR2 this week.

Since Week 6, Dulcich’s first NFL game, the rookie tight end has led the Broncos in targets (43), receptions (28), yards (361), and routes run (255) this season. Basically he’s been Russell Wilson’s go-to guy for the better part of the season. That role has led Dulcich to be the .5PPR TE10, producing five TE1 performance. And I haven’t even mention who the Broncos are playing this week.

The Cardinals are giving up 6.8 receptions, 79.2 yards, and 0.7 touchdowns per game to the tight end position this season. They’re almost surrendering 80 yards AND A TOUCHDOWN to every tight end they’ve played this season. (I know many teams utilize two or more tight ends in a game but that has a lot less punch when selling just how bad this defense has been.) Unsurprisingly, Arizona is giving up almost 20 PPG to opposing TEs, three more than the next closest Seahawks. I’m confidently starting Dulcich this week as my TE in the fantasy playoffs.