There’s always risk in fantasy football. You’re never certain in the performance you’re going to get from a certain player when you start them. Even Geno Smith occasionally has a bad game. (But like, just once.) In order to help you make the best start/sit decisions for your fantasy team this week, I’ve used our NECC consistency rating to chart the safest and riskiest starts for Week 6.

I’ve charted every position’s NECC rating over their .5PPR points per game to help visualize who are safe and risky starts this week. The chart is hard to read but never fear, I’ve highlighted a few high-risk, mid-risk, and low-risk starts for Week 6. Feel free to do your own digging with the stat and use it when making your own start sit decisions. 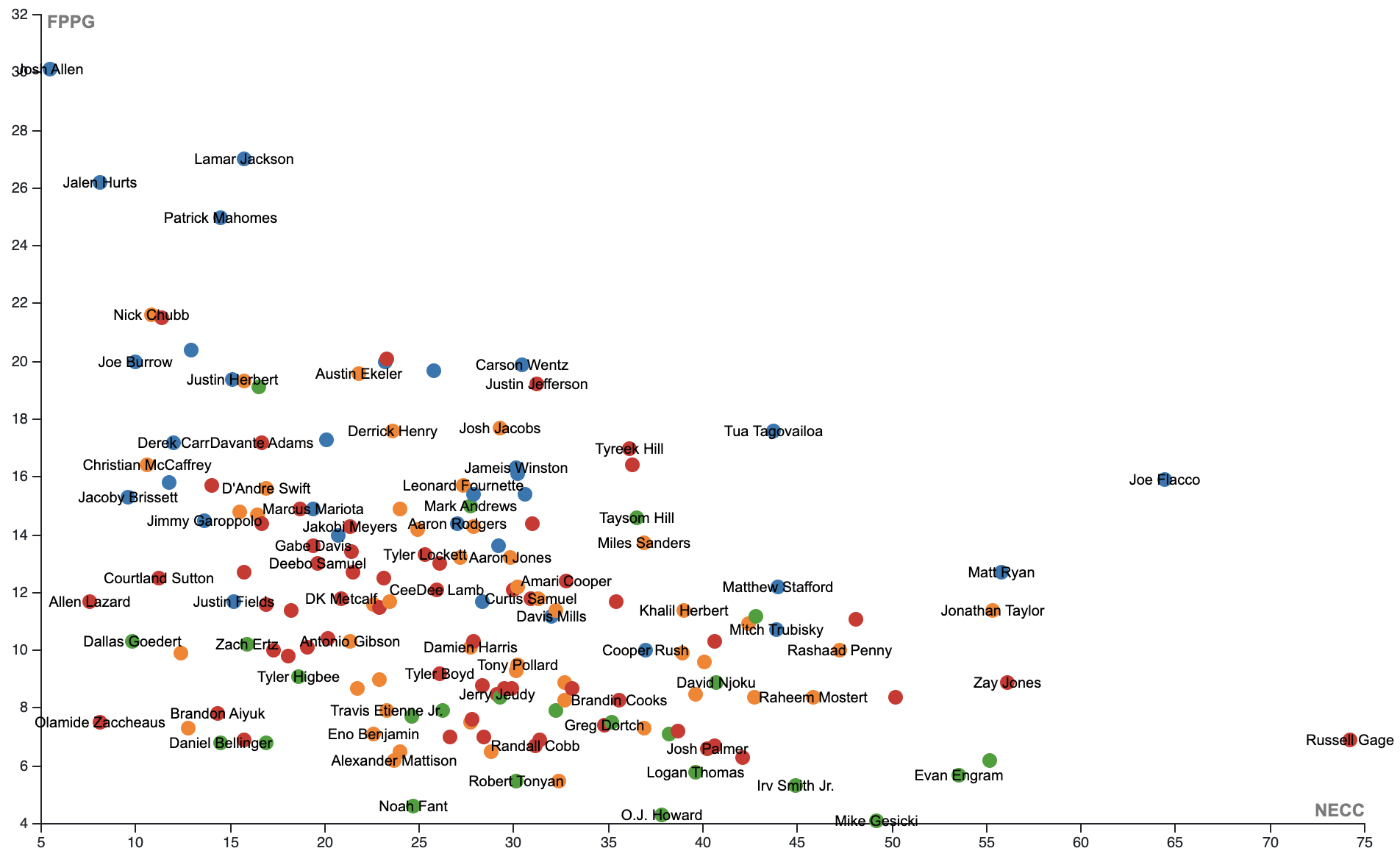 Elliott has been inconsistent, but mainly he’s been just wildly inefficient. Despite being tied for eighth-most attempts this season (81), he’s only racked up 305 yards and 1 touchdown. Only seven running backs have a worse yards per attempt than Zeke. He also ranks dead-last in PER rating, averaging 0.48 points per touch. While he may be getting the bulk of the Cowboys’ backfield work, Elliott has proven he’ll do nothing with it.

The Eagles aren’t going to be Elliott’s get-right game either. Philadelphia ranks top 10 in rush defense (per NEFF) and are allowing just 79.2 yards per game to backs (7th fewest). Hopefully by this point you have another back you can rely on to be your RB1 or RB2 this week.

I had such high hopes for Pittman this year. He looked amazing in Week 1, tallying 121 yards and a touchdown on 9 catches, but since then he’s done a bunch of nothing. The Colts are missing Carson Wentz, as Matt Ryan currently ranks 27th out of 30 QBs in our QPI Index. And when you’re missing Carson Wentz, you know your QB position is struggling.

Things certainly aren’t going to get easier for Pittman—or fantasy managers—this week. The Jaguars are allowing the 12th-fewest points to wide receivers, just over 24 per game. Even in a favorable matchup I’d be wary of Pittman. In a bad matchup? I’m staying away if I can.

It has been a rough start to the year for Stafford and the Rams. After a Week 1 poopfest, Stafford gave managers a morsel of hope, tossing three touchdowns against the Falcons. Sadly, that morsel was poisoned as since that game, Stafford has only thrown one touchdown and has been intercepted twice. That’s one touchdown in three games. And against the 49ers he managed to score less than five fantasy points. Well done Matt.

I shouldn’t have to tell you not to play Stafford. Likely by now you’ve moved on to the greener pastures of Geno Smith or Jacoby Brissett. (Yes, those quarterbacks are much better options than Stafford right now in fantasy.) The Panthers may feel like a cupcake game for Stafford but Carolina has allowed the 10th-fewest passing yards this season, tied with the Patriots.

If it wasn’t for his Week 1 dud, Rodgers more than likely would be high in NECC rating. He’s been fairly consistent since opening weekend, tossing for at least 220 yards and 2 touchdowns in every game. It’s clear Rodgers is building trust with his new wide receiver core and that’s leading to improved fantasy outputs.

That being said, Rodgers has thrown an uncharacteristic number of interceptions to start the year. He’s thrown one in over 50% of games this season. The Jets, while average in fantasy points allowed to QBs, are averaging almost a pick and a half a game. A decent outing from Rodgers could be quickly derailed by an interception against one of the best defenses at it this year.

Chase’s start to the year has been the exact opposite of Rodgers. If not for his big Week 1, he’d be the WR32 in .5PPR. Yikes. It’s not for lack of trying though as Chase’s 27.6% target share ranks him 7th among wide receivers this season. He’s still Joe Burrow’s No. 1 target, he’s just nowhere near as efficient as he was last year (his PER is 1.14, t-54th).

Here’s to hoping that vs the Saints Chase can put together a WR1 week. New Orleans has struggled against wide receivers this year, allowing 30.8 PPG, 24th in the league. However, they rank No. 1 in red zone points allowed, giving up just 1.5 per game. Let’s hope Chase has a big play touchdown in him this week.

With all the buzz surrounding Breece Hall, it’s easy to overlook the fact that through five weeks, Carter is a top-24 back in fantasy. Now much of that total production has come in two games, with last week’s two touchdown performance being his best of the season. He’s also had multiple dud games, scoring under six .5PPR points twice. Naturally, this would lead to a fair amount of expected volatility.

The Packers are not a bad matchup for running backs, allowing the 17th-fewest PPG to the position. Perfectly average. This might be a matchup in which both Jets’ backs can eat. Still, Hall has seen his opportunity share only increase over the last few weeks, meaning Carter’s touches are growing fewer and farther between.

It feels like every year people underrate Mike Evans in fantasy and every year he goes out and proves he’s one of the most consistent and efficient receivers in the game. Evans has only gone under 70 yards receiving once this season and ranks top four among WRs in PER rating (2.06). He’s still Tom Brady’s go-to red zone threat, leading the Buccaneers in red zone targets.

All this points to a Hulk game this week facing the Steelers’ woebegone secondary. Pittsburgh is giving up the most fantasy points (40.3), yards (221.2), and touchdowns (1.8) on a per game basis to opposing wideouts this season. I’m stacking the Bucs offense wherever I can this week.

Were you thinking of not starting the second-best back in fantasy this week? Of course not. Chubb has been not only the RB2 in fantasy but also the RB2 in NECC rating. He’s a weekly start no matter the matchup. The only reason I feel the need to mention Chubb is because of his matchup this week.

The Patriots are one of the best teams at limiting opposing backs this year, allowing just 15.9 PPG (6th). We all know Bill Belichick loves to take away the one thing you do well, which for the Browns is run with Nick Chubb. They’re also the lone defense to not allow a rushing touchdown this season. It’ll be a tough matchup for Chubb, but he’s proven to be trustworthy no matter the situation.

Ertz has been about as reliable at the tight end position as you can get. He’s seen six-plus targets in all but one game this season and seen double-digit targets in three. He’s had 6 catches for 45+ yards in each of the last three weeks and ranks top four in TE target share (18.7%). Ertz is going to give you a top five TE week regardless of matchup. And who is his matchup this week? Oh it’s just the Seahawks giving up 22.7 PPG to the TE position (32nd). Bingpot.