Can you trust Ezekiel Elliott this week vs the Lions? Using NECC consistency rating to identify the riskiest and safest starts for Week 7 fantasy football.

There’s always risk in fantasy football. You’re never certain in the performance you’re going to get from a certain player when you start them. Even Geno Smith occasionally has a bad game. (But like, just once.) In order to help you make the best start/sit decisions for your fantasy team this week, I’ve used our NECC consistency rating to chart the safest and riskiest starts for Week 7.

I’ve charted every position’s NECC rating over their .5PPR points per game to help visualize who are safe and risky starts this week. The chart is hard to read but never fear, I’ve highlighted a few high-risk, mid-risk, and low-risk starts for Week 7. Feel free to do your own digging with the stat and use it when making your own start sit decisions. 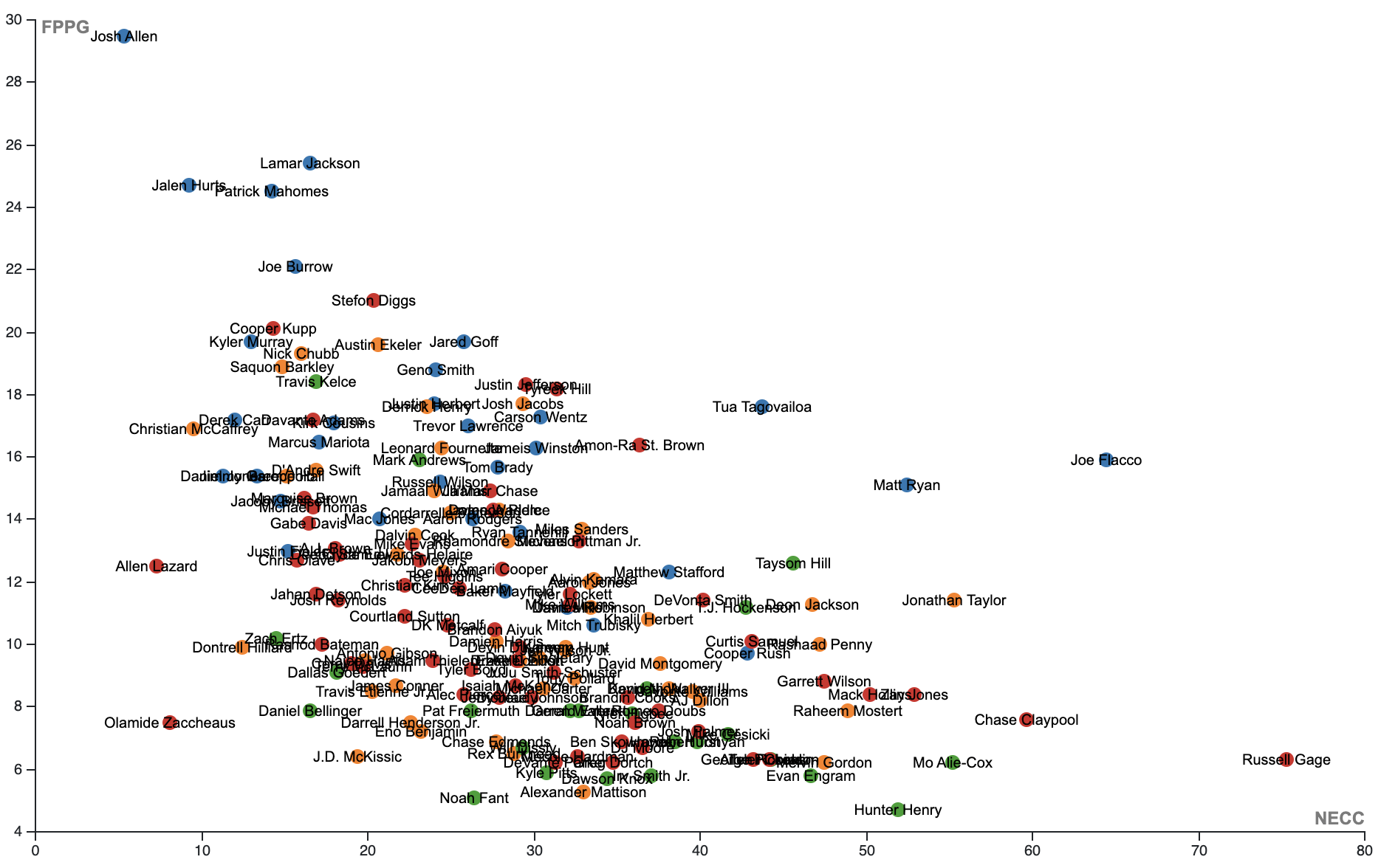 While Montgomery is reliably seeing double-digit touches this season, he’s just not doing much with them. Two out of the four games he’s played in this season (not counting Week 3 since he left early with an injury), Montgomery hasn’t rushed for over 30 yards. Luckily for fantasy managers, one of those games he was able to score a touchdown and rack up 62 yards receiving, giving him his best fantasy outing of the year. He ranks bottom seven in PER, averaging only 0.65 points per touch.

Week 7 doesn’t bring with it an easy matchup either. The Patriots are the lone defense this year that hasn’t given up a rushing touchdown. More over, they’re allowing just 15 PPG to opposing backs, third best in the league. In a tough matchup, and with Khalil Herbert always ready to vulture points, I’m staying away from Montgomery this week.

Despite coming off his best game of the season, I still have little faith in Claypool as a weekly start. As the chart above so lovingly displays, only Russell Gage has a worse NECC rating this year among wide receivers. Claypool not only has been inconsistent this year, he’s also been wildly inefficient. Look no further than his 1.11 PER rating, tied for seventh worst among WRs. Hell, the Steelers might be trying to trade him!

If you have to start Claypool, this isn’t a bad week to do so. The Dolphins grade out as one of the worst pass defenses in the league this season per NEFF rating. They’re allowing the 7th-most fantasy points (31.9) and 11th-most yards per game (171.3) to opposing wideouts. Maybe the Claypool jackpot hits this week as well, but it’s a big risk.

Hockenson is currently the TE5 in .5PPR but almost 65% of his total points game in one game. Outside of his massive Week 4, Hockenson has failed to score double-digit points in any week. He’s also had two weeks with under 20 yards receiving. The Cowboys defense has been one of the biggest surprises so far this season. They rank No. 2 in NEFF rating and are giving up just 5.9 PPG to opposing tight ends (5th best). Not putting my trust in Hock this week.

It’s been a bumpy road for Zeke managers this season. Last week against Philadelphia, Elliott put together his best game of the season, finishing with 81 yards and a touchdown on 13 attempts. It was also easily Elliott’s most efficient, averaging 6.2 yards per attempt. Prior to Week 6, Zeke was averaging just over 3.5 yards per attempt. He also had only gone over 55 yards rushing twice.

Two things should have Zeke managers feeling better heading into Week 7. First, Dak Prescott is set to return which should only help the Cowboys offense. Second, the Lions are terrible at stopping the run. Only the Texans are giving up more points and yards per game to opposing backs. If there was ever a matchup for Zeke to build upon his recent success, it’s this one.

For the most part, Cooper has been a reliable WR1 this season. He’s scored a touchdown in four-of-six games this season and has gone over 100 yards receiving twice. However, sprinkled in with those solid WR1 outings have been a few truly putrid performances. Twice this season he’s failed to catch more than 3 balls and go over 18 yards receiving. When Cooper has an off week, it’s WAY off.

While the Ravens secondary looked awful early in the season—55.6 WR PPG through Week 2 (32nd)—they’ve gotten better and healthier in recent weeks, allowing 22.9 WR PPG since Week 3 (11th). Cooper should be started as an easy WR1, but the risk of a dud looms large.

As with most tight ends not named Travis Kelce or Mark Andrews, Hurst has had good weeks and has had bad weeks. Notably, he’s had more good than bad recently, catching a touchdown in two of his last three games. The Falcons this season are giving up the third-most points to opposing tight ends, over 13.5 points per game. They’ve also surrendered the second-most targets per game (9.3) which is worth noting as Hurst is averaging 1.33 points per target this season.

I’m almost too in on the Etienne train. For two weeks now Etienne has out-snapped and had a higher opportunity share than James Robinson. In that span, he’s averaging 78.5 rushing yards, a ridiculous 7.9 yards per attempt, and has been the RB15 in .5PPR. And that’s all without scoring a single touchdown.

While the Giants have given up the 12th-fewest RB PPG this season, they’re by no means a defense to worry about. Their run defense ranks 25th in the league per NEFF and is giving up the 6th-most rushing yards on a per game basis (117.8). Given Etienne’s growing workload, and weekly consistency and efficiency, I’m trusting him as a high-end RB2 this week.

It brings so much joy to my heart seeing Lazard breaking all our advanced metrics. Lazard currently is the WR1 in NECC and WR8 in PER, averaging 1.84 points per target. (He also has the fourth-highest touchdown dependency among WRs but we’ll look past that for now.) Since Week 3, he’s been the WR9 in .5PPR. You, and by you I mean me, LOVE to see it.

The Commanders rank 29th in WR points allowed, giving up 33.8 per game to the position. They rank 31st in red zone points allowed (8.7 PPG) which is great news for Aaron Rodgers’ go-to red zone target. There’s no reason to think the Lazard Herpetologists Club is going anywhere this week.

Jimmy G might not be putting up elite numbers, but since Week 4 he’s been the QB11 in fantasy. That’s pretty good for a player who’s likely available in your leagues right now. He’s been extremely reliable and efficient, ranking top 10 in both NECC and PER rating. His efficiency shouldn’t take a hit this week as the 49ers take on the Chiefs.

Kansas City ranks 30th in QB PPG allowed (22.1) and have given up 15 passing touchdowns, most in the league. With the 49ers defense banged up, Garoppolo might have to toss the football around to keep up with Patrick Mahomes and the Chiefs. That bodes well for a man averaging 0.46 points per attempt (7th).