There’s always risk in fantasy football. You’re never certain in the performance you’re going to get from a certain player when you start them. In order to help you make the best start/sit decisions for your fantasy team this week, I’ve used our NECC consistency rating to chart the safest and riskiest starts for Week 10.

I’ve charted every position’s NECC rating over their .5PPR points per game to help visualize who are safe and risky starts this week. The chart is hard to read but never fear, I’ve highlighted a few high-risk, mid-risk, and low-risk starts for Week 10. Feel free to do your own digging with the stat and use it when making your own start sit decisions. 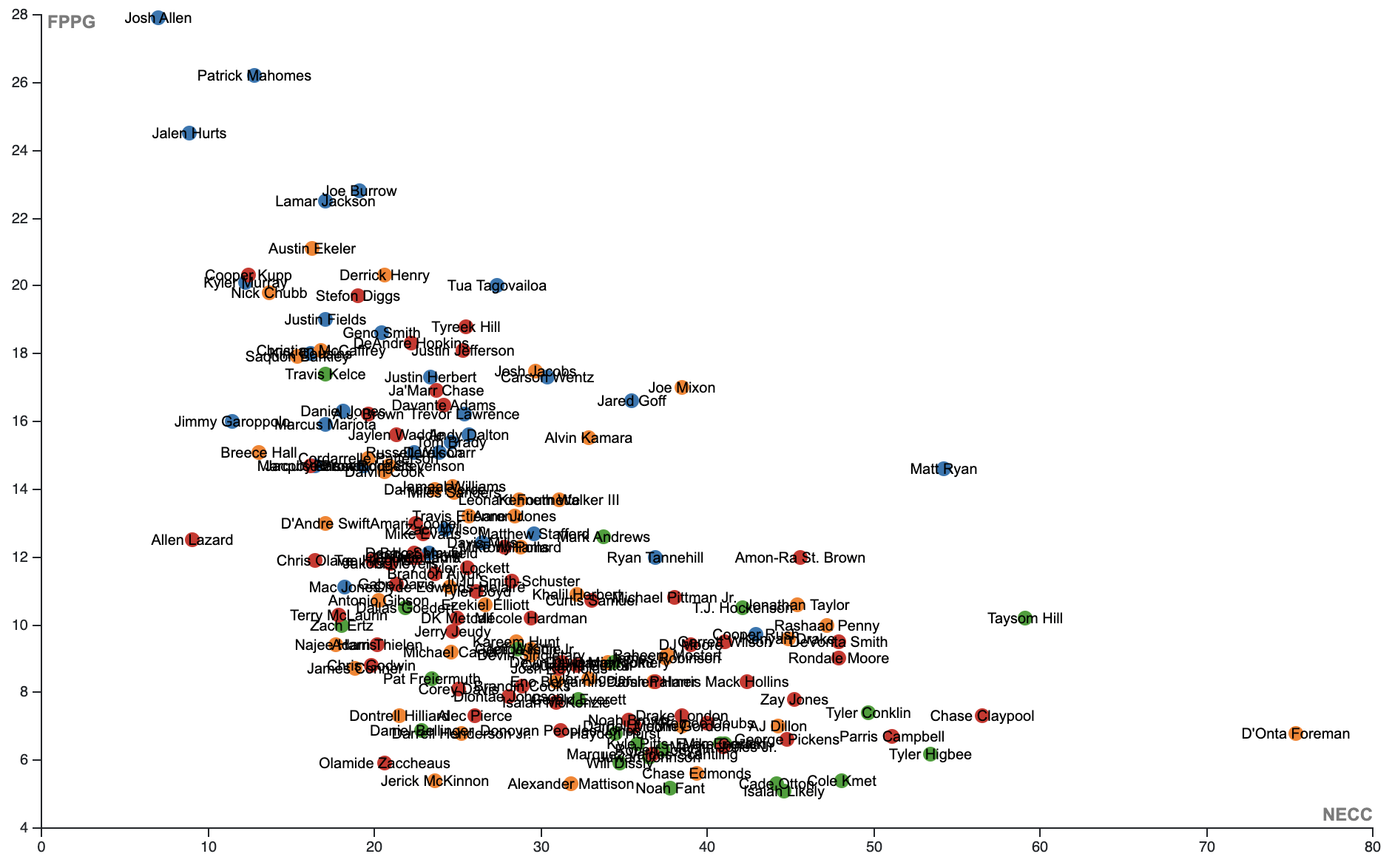 The Broncos’ offense as a whole has been wildly unreliable this season. It only stands to reason that Gordon would follow suit. The veteran back has provided a few top-24 performances this season but he’s also had some truly catastrophic lows. Like negative points. Those are the lows I’m talking about

I can assure you Week 10 isn’t going to be a get-right-game for Gordon either. The Titans’ run defense ranks No. 1 in NEFF rating and has allowed the second-fewest yards to opposing backs (542). They are also one of just two teams to have allowed a single rushing touchdown this season so don’t go thinking a rouge TD is going to save Gordon’s day.

Oh how the mighty have fallen. That can be said for both Higbee and the entire Rams’ offense. After starting the year averaging almost 10 targets per game, Higbee’s target share has cratered in recent weeks. Since Week 6, Higbee’s seeing just three targets a game and hasn’t mustered over 15 yards receiving.

This might be the lone matchup Higbee is worth starting in anymore. The Cardinals have been truly terrible against tight ends, allowing 21.2 points per game (1st worst), along with the most total receptions (69), yards (774), and touchdowns (7). If there’s any week for Higbee to return to his former-self, it’s this one. But how much can you trust him, especially with Matthew Stafford’s health now up in the air.

My faith in the Colts’ offense is at an all time low. Their offensive line is playing terrible, Sam Ehlinger is under center, and now Jeff Saturday is their head coach. Call me skeptical this team will be able to put points on the board rest of the year. Even without all this turmoil, I’d be skeptical about Pittman. While Pittman is a solid WR2 this season in terms of total scoring, he’s only had two WR1 performances this season. He boasts a bottom-10 PER rating, averaging just 1.13 fantasy points per target.

The Raiders’ pass defense ranks dead-last in NEFF rating but has been league-average in WR PPG allowed (34.3). So while the Colts might have success moving the ball through the air this week, that doesn’t necessarily mean it’ll translate to a big Pittman game. I’d be looking to move on from any Colts players right now (and yes, that does include Jonathan Taylor).

Wilson certainly hasn’t been the elite QB1 many expected him to be this season. Only once this year has he finished better than QB5 in fantasy. But he has been overall decently consistent, with most of his weekly finishes falling around his QB21 rank. He’s also been showing some flashes on the ground in recent weeks, averaging 22.8 yards per game since Week 4.

As mentioned above, the Titans’ defense has been elite at stopping the run. However they have not been great limiting opposing QBs. On the year they’ve given up the seventh-most QB PPG (19.8) and the second-most passing yards (295.5). This feels like a matchup Wilson could put together a top-12 performance against.

It’s been a rough three weeks for Fournette and fantasy managers. Through Week 6, Fournette was the RB5 in .5PPR, averaging 20-plus touches per game. Since then, he’s averaged just 12 touches per game and was the RB26 during that time. With rookie Rachaad White nipping at his heels, Fournette’s vice grip on the Bucs’ backfield—72% opportunity share (eighth among RBs)—might be faltering.

The Seahawks are a favorable matchup for running backs, ranking 26th in run defense NEFF rating. On the year they’re giving up the 11th-most RB PPG, including 4th-most receiving yards to backs (410). Currently only Austin Ekeler, Christian McCaffrey, and Alvin Kamara have more receiving yards than Fournette. There’s a ton of risk starting Fournette, but we know he can give you RB1 upside in a plus-matchup.

On the flip-side of the ball, Tyler Lockett has put together a very Tyler Lockett season so far. Lockett has had two top-10 finishes, including one monster game in Week 5 vs New Orleans. He’s also had two finishes outside the top 60 at wide receiver. The Seahawks’ receiver has made a career of being a swinging pendulum, going from the greatest fantasy receiver in the history of the world to a guy who barely deserves to sit on your bench. For the most part this season though, Lockett has given managers solid WR2 production on a weekly basis.

While the Buccaneers’ defense was once formidable, that hasn’t quite been the case in recent weeks. Since Week 6, Tampa is giving up the 11th-most WR PPG (32.9), including WR1 performances to Chase Claypool, DJ Moore, and Cooper Kupp. As a Lockett manager myself, I’m banking on a good week from him.

Patterson has started and completed four games this season. In all but one of those games he’s finished a high-end RB1. That’s the level of consistency that gets you into the NECC rating top 10. He’s been hyper-efficient this season as well, ranking RB9 in PER, averaging 0.98 points per touch. That level of efficiency in an offense where Arthur Smith can’t help but run the ball 30 times is a recipe for fantasy success.

The Panthers have been a dumpster fire vs running backs all season but particularly in recent weeks. Over the last four weeks, Carolina is allowing 29.2 RB PPG, the third-most in the league. Only the Texans and Raiders have been worse. The only thing that worries me about playing Patterson this week is this situation crossing the dreaded it’s-so-good-it’s-bound-to-fail line.

Not every start on your fantasy team needs to get you huge scoring outputs. Thielen hasn’t had any WR1 performances this season but he has been extremely consistent as a low-end WR2/Flex play. In fact, since Week 3, he’s only finished below a WR3 once. He also hasn’t seen fewer than seven targets in a game since Week 1. Definition of consistency.

Buffalo’s defense isn’t a pushover by any means. They rank sixth in pass defense NEFF and are allowing the 11th-fewest WR PPG on the year (30.1). Their secondary has struggled slightly in recent weeks as they’ve fallen to allowing the 19th-fewest WR PPG (31.9) over their last three games. Don’t expect Thielen to put up WR2-plus numbers, but I’d have confidence starting him as my WR3/Flex even in a tough matchup.

Only twice has Freiermuth seen fewer than seven targets in a game this season. With Chase Claypool now in Chicago, Freiermuth’s target share is only likely to expand as the Steelers’ passing tree narrows. As is, his 16.3% target share ranks him ninth among TEs. He’s been one of the surer bets at the position all season.

The Saints have been one of the best defenses against tight ends in fantasy this season. They’re allowing just 7.5 TE PPG, second-fewest in the league. However, they are giving up the ninth-most targets to the position (60) and are coming off surrendering a TE1 performance to Isaiah Likely. Freiermuth is a low-end TE1 this week.