If you love quarterbacks the same way I do then buckle in as I’m unveiling my series of quarterback metrics aimed at showing who is the best passer based on a series of statistical measures, both for fantasy and ‘real’ football related.

I’ve been able to build a database of passing data all the way back to the NFL/AFL merger in 1970, covering over 32,000 individual passing performances, from Joe Namath and Johnny Unitas through the times of Dan Marino and Joe Montana to Tom Brady and Patrick Mahomes. I’ve used those passing numbers, along with other data to produce these metrics and as well as providing the historical database of performances, I’ll be releasing the latest numbers  weekly during the season to track how the quarterbacks stack up against each other in 2021.

The first metric I’ve developed is a measure of quarterback efficiency from a purely passing perspective. I’ve taken the outdated calculation used for passer rating (Completion %, Yards per attempt, Touchdown % and Interception %) and looked to add more depth to it by including net yards per attempt instead of yards per attempt, and additionally used adjusted sack rate and yards per completion to the formula.

Each of the six metrics has been weighted based on analysis of the frequency of occurrence with the aim of the metric to show the play of the quarterback as a wider function of the offense. This is because sacks are just as much a quarterback stat as they are a reflection of the offensive line, and using yards per completion showcases the quarterback’s ability to put his receivers in position to make game-changing plays, as much as the skill and speed of the players making the catch. When these six metrics come together, the calculation gives a rating for each quarterback that is out of 100%, which I believe makes for a simple comparison tool for looking at quarterback play.

The all-time QPI rating is 44.8%, but has steadily increased over time, with a surge over the last 10 years. The first year the average rating broke above 50% was in 2014, with five of the six years since above that mark, and 2020 saw a record high of 53.0%. This is indicative of the increasing focus on the pass in the NFL, though I anticipate the record numbers we saw in 2020 were a slight aberration based on the unusual offseason during the global pandemic last year which would have left defenses less prepared than in other years. 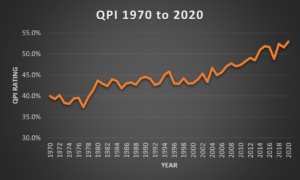 From an individual perspective, though it has been an incredibly rare occurrence, it is possible to achieve a “perfect” QB Index rating by hitting a set series of benchmarks based on the six metrics:

In total, there have been just 14 “perfect” games since 1970, with the first coming in 1972 from Daryle Lamonica for the Oakland Raiders, and the latest in 2019 from Deshaun Watson for the Houston Texans. Only one has ever come in the playoffs, with Peyton Manning achieving the feat in the 2003 Wild Card round. Somewhat bizarrely, two of the perfect games came in losing efforts, with a Mike Buck effort for the New Orleans Saints in 1993 alongside Lamonica’s 1972 game.

In terms of all time QPI, the metric tends to favor the more recent quarterbacks, with 14 of the top 20 all time having played in the 2020 season, and all bar 2 having played this century. This again I believe is more a function of the passing era we find ourselves in, but the high level of play we have seen in Patrick Mahomes’ short career puts him on a previously unseen trajectory to be so far ahead of his fellow passers so early in his career. The fact that the pair of hall of fame quarterbacks in Steve Young and Joe Montana make the top 20 also shows the incredible level of play these guys put up in a much less pass friendly era and that if they were playing today they would likely be consistently high in the yearly QPI ratings.

As with any metric, you need a leader at the end of every season to show who was the best overall and I have pulled together the league leading QPI rating for every season since 1970 (min 100 pass attempts). Thirteen quarterbacks have led the league multiple times, with Peyton Manning finishing the season with the highest QPI five times, Steve Young four times and four players finishing top three times in their careers (Drew Brees, Dan Marino, Dan Fouts and Ken Stabler).

One of the things that has become more and more apparent as I have analyzed the play of the quarterback is that focussing solely on passing statistics didn’t do enough to account for the abilities of quarterbacks who impact the game with their running ability.

I kept coming back to the MVP seasons from Cam Newton in 2015 and Lamar Jackson in 2019 and how could I adjust my ratings to account for the unique abilities these players possess as their respective QPIs from those seasons (Newton 55.7%, Jackson 54.7% ) had them as the 9th and 17th ranked quarterbacks in those seasons, hardly MVP worthy numbers. To account for where they add value to the position, I have adjusted some of the calculation formulas to make rushing a part of the ratings.

The new formula kicks in where a quarterback attempts at least five rushes in a game and utilizes a rush adjusted completion rate, net yards per attempt, yards per completion and touchdown percentage to give a new rating. Using this new formula applied to Newton and Jackson’s MVP seasons, Cam sees a rating increase to 58.2% (+2.5%) but stayed as the 9th rated quarterback, whereas Lamar saw a +13.2% increase thanks to his 1,200 rushing yards and 7 rushing touchdowns to finish with a 67.6% rating, the third highest of 2019.

In career terms, Lamar Jackson sees the biggest increase in rating when adjusting for rushing ability, with his RQPI at 61.2% vs a QPI of 55.7%. Based on all quarterbacks with at least 30 career starts, Jackson leaps from 14th to 2nd behind only Patrick Mahomes. Other quarterbacks who see a significant increase in QPI when adjusting for rushing include Bobby Douglass (70’s Bears) at +5.1%, Michael Vick (+4%), Kordell Stewart (+3.4%), Cam Newton (+3.3%) and Kyler Murray (+3.1%).

The above ratings are some of the work I’m most proud of in analyzing the NFL and I hope that others find them helpful. If you have any questions, you can hit me up on Twitter @PaddiCooper and I’ll be happy to help any way I can.