NerdBall hosted a mock draft over the holiday weekend so I handed out roster superlatives.

Over the holiday weekend, we hosted a 2021 fantasy football mock draft to start getting a sense of how drafts might play out this year. This was a Superflex draft with PPR, full scoring and roster details at the end. Even if this is not your format, our way-too-early mock draft can give us a head start on trends we’ll see unfold this pre-season. Full draft posted below, who do you think had the best team?

Jax wasn’t bargain basement shopping, but he ended up with some great, high-end values in the draft.

Aaron Rodgers was lights out in 2020, and even if he takes a step back, Rodgers seems about as solid a lock as there can be to hit that QB8 price. Rodgers has finished inside the top-10 QBs in points per game 4 out of the last 5 seasons.

Rodgers is likely to remain a value as long as questions about if and when he’ll play remains indefinite. I believe he will be the Green Bay Packers starting QB in Week 1. I have no special insider information, but sometimes you just have to decide and get going.

Ryan Tannehill was 18th in passing attempts in 2020, and he finished 12th in QB points per game. The Tennessee Titans ran the ball the second most (300+ fewer yards on the season than the No. 1 team, and budding rival, Baltimore Ravens), and they scored the fourth most points. These stats just highlight what we know from watching Tennessee play; the Titans have an incredibly efficient offense thanks in no small part to the league’s most valuable back, Derrick Henry.

The big move this offseason, so far at least, was Julio Jones joining the Titans. I doubt the Titans will transform into a pass first team with the addition of Julio Jones, but Jones is a big upgrade on Corey Davis. Tannehill is a shot worth taking as your QB2, Superflex or no.

Justin Fields is an athletic, first-round rookie QB. Far lesser prospects with lesser credentials have been fantasy week-winners for us in the past, so I like taking this shot late, even if the Bears coaching staff appears to be doing everything they can to be relieved of their coaching duties early in the season.

Not surprisingly, the team who spent the most on running back has a potential league crushing running back room.

Three backs in a row in 1-QB leagues isn’t that unusual, but in this Superflex, PPR draft, we only had the one manager take this tact. This is an old-school approach which can still be super effective in the age of PPR. While PPR elevates wide receiver value in an effort to equalize wide receiver and running back positional values, it doesn’t change the sound economic principle that scarcity can create immense value. Workhorse backs are scarce (61 WRs versus 38 RBs averaged ten or more PPR points per game in 2020).

All three of these early picks could end up being ranked inside the top 5 of their position group every week, and it sure seems like we’re able to tease out more productive weeks from receivers available on the waiver wire than RBs we might pick up week to week.

Paddi took full advantage of the annual under-valuation of wide receivers over 25. Amari Cooper going as WR20 and Courtland Sutton in the eighth round particularly standout to me. He then took a shot on a receiver who may end up leading rookies in receiving yards in Jaylen Waddle in the 13th round.

There is some injury concern, there is some age concern, but again, thinking about that week-to-week rank, this WR room could carry a team to a championship.

Kelce is far and away the TE1, and I’m an advocate of taking him anywhere past about the sixth pick in the first round. But, Waller is the TE2 with the immense volume he sees in Las Vegas. The Raiders lost a few targets with Nelson Agholor heading to New England, making snagging Waller this late in the third my favorite tight end pick of the draft.

Best team? You tell me who your favorite team is. 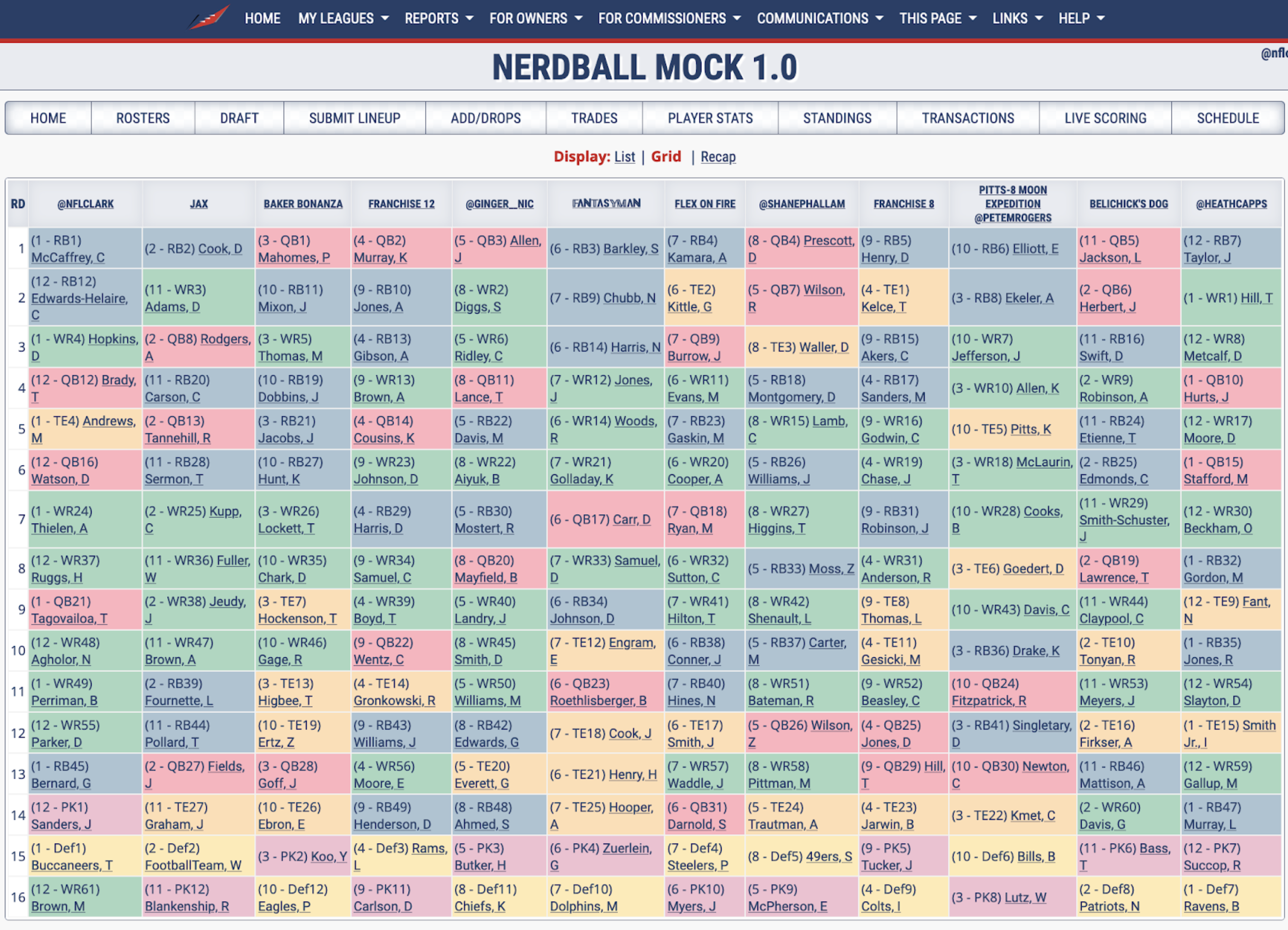 Tip the Author
Become a Patron!