Julio Jones is a risky start, but the payout could be big. Using NECC consistency rating to identify the riskiest and safest starts for Week 7 fantasy football.

There’s always risk in fantasy football. You’re never certain in the performance you’re going to get from a certain player when you start them. Even Derrick Henry occasionally has a bad game. In order to help you make the best starts & sits decisions for your fantasy team this week, I’ve used our NECC consistency rating to chart the safest and riskiest starts for Week 7.

I’ve charted running backs, wide receivers, and tight ends’ NECC rating over their .5PPR points per game to help visualize who are safe and risky starts this week. The chart is hard to read but never fear, I’ve highlighted a few high-risk, moderate-risk, and safe starts for Week 7 below. (I’m still figuring out the best way to visualize all this data so bear with me.) 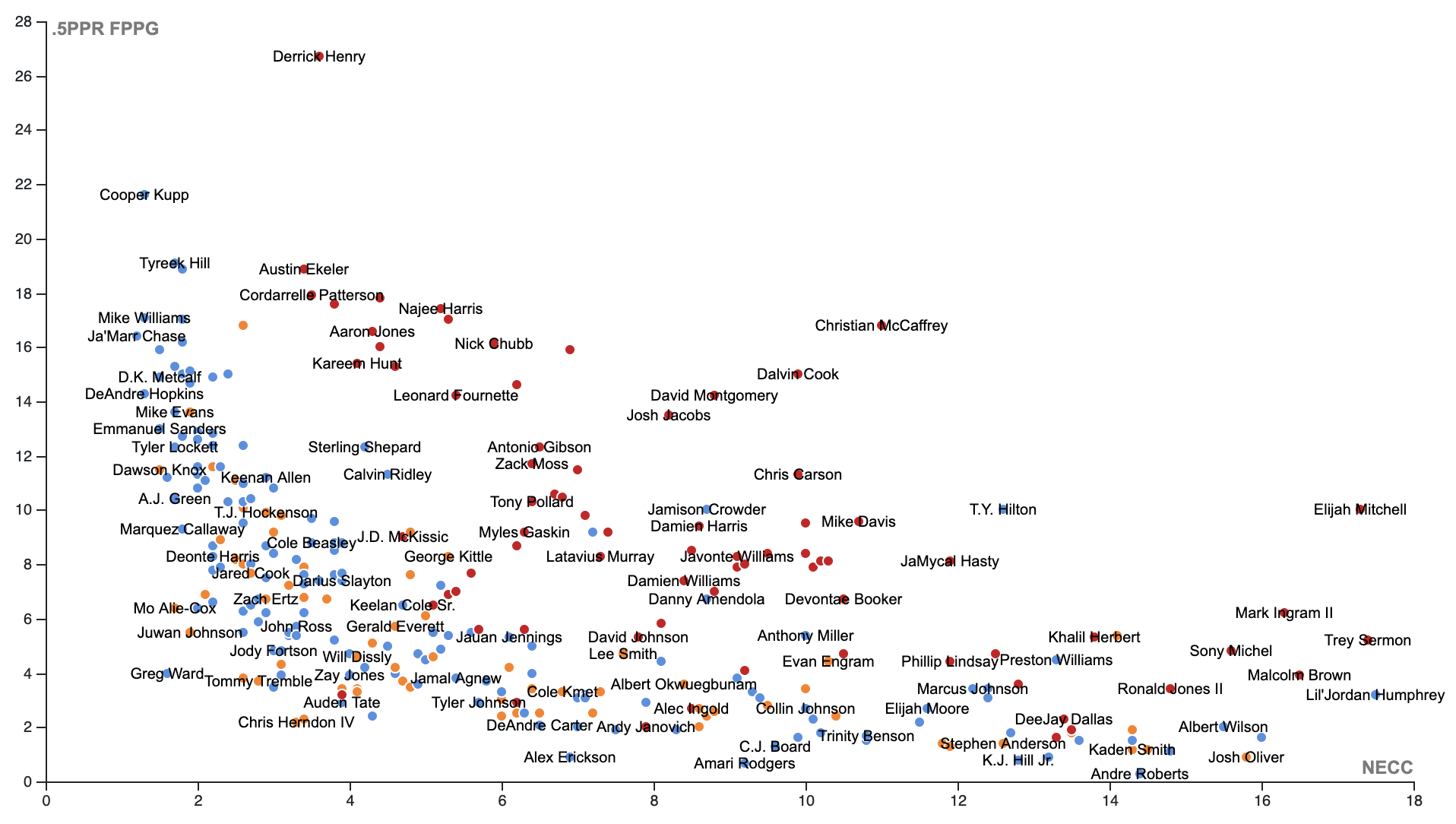 There are a few names who you can very clearly read on the chart above. Derrick Henry towers over everyone, averaging 26.7 FPPG and with a 3.6% NECC rating to boot. Christian McCaffrey is another with his high production but injury-related volatility. Then there’s Elijah Mitchell.

Mitchell had an amazing Week 1 but since then has not been able to produce at the same level despite still receiving a high workload. In the other two games Mitchell has started outside of Week 1, the rookie back has averaged 15 touches but only 57 yards to go with all that work. Week 7 isn’t a favorable matchup for Mitchell either as the Colts have allowed the fifth-fewest fantasy points this year to backs and only allowed one total rushing touchdown this year.

We all know Crowder is a target hog and a PPR darling. Since coming back for the Jets in Week 4, he’s seen at least six targets in each game. It hasn’t taken long for Zach Wilson to lock onto the veteran receiver and force feed him targets. However, Crowder hasn’t been wildly efficient with the touches he’s been given this season. He went from a 61 yard outing in Week 4 to just 24 yards in Week 5 against the Falcons.

Crowder’s Week 7 matchup against the Patriots has historically given him trouble. In his career vs. New England, Crowder is averaging under 5 targets and 35 yards per game. He’s worth the play if you’re in a PPR league struggling for a receiver to start. Outside of that, Crowder has a lot of risk associated with him.

While Conner isn’t technically the Cardinals starting running back, he’s been by their their most consistent and efficient (from a fantasy standpoint of course). His 6.8% NECC rating is ahead of Chase Edmonds’ 7.1% and he’s also outperforming Edmonds in .5PPR PPG (10.5 to 9.8).

Conner has proven himself a reliable flex starter and he has a beneficial matchup vs the Texans this week. Houston has given up the 13th-most fantasy points to running backs along with the 6th-most red zone touches, which is where Conner does his damage. Conner is well-worth starting as your flex or even RB2 if your desperate in the byepocalypse.

Julio falls well outside the top-5o wide receivers in terms of NECC rating this year. A hamstring injury has him playing peekaboo with the Titans’ starting lineup, jumping in and out over the last three weeks. However, he started for Tennessee against the Bills last week and managed to finish with 59 yards on 5 targets, playing 66% of the team’s snaps. That should be encouraging to fantasy managers.

If you’ve held onto Tonyan this long, you must either be a Packers or Indiana State fan. Last year’s breakout tight end has started the year averaging just 3.5 .5PPR PPG and has a NECC rating of 4.8%, ranking him 40th among TEs. Still, we know he can be a go-to weapon for Aaron Rodgers in the red zone and Washington has been giving up the 10th-most fantasy points to the position over the last four weeks. There’s risk here, but Tonyan could surprise a lot of people this week.

I doubt I need to tell you to start the overall RB10 in .5PPR scoring but I just want to stress both how good and reliable Patterson has been this year. His 3.5% NECC rating is second only to Austin Ekeler among running backs. His breakout has been one of the best storylines of the 2021 NFL season and it doesn’t appear to be going anywhere soon.

You should have even more confidence in starting Patterson as the Dolphins have one of the worst ranked run defenses in the NFL this year. They’re giving up 29.48 FPPG to backs which is fourth-worst in the league. Coming off a bye, Patterson is primed to pick up right where he left off.

As someone to highly touted Ruggs coming out of college, I have been loving the Ruggsaissance. Ruggs hasn’t quite shown the consistency you want out of an elite WR1 but he has been exceptionally productive with the touches he’s gotten. He only has one game this season with under 50 yards receiving and that was back in Week 1. The Eagles’ pass defense is average—they rank 15th in NEFF rating—but have been exposed at times this year. Need I remind you of Tyreek Hill’s absurd 186 yards and 3 touchdown game against them.

Ruggs has earned the right to be consistently in your starting lineup.

Henry has emerged as the top tight end in New England and it’s led to him having one of the best NECC ratings among TEs. His 2.3% rating ranks seventh ahead of players like Darren Waller, Dallas Goedert, and Noah Fant. He walks into a terrific matchup as well as the Jets are surrendering the third-most points to TEs over the last four weeks (20.70 per game).