There’s always risk in fantasy football. You’re never certain in the performance you’re going to get from a certain player when you start them. Even Derrick Henry occasionally has a bad game. Once. Like thirty-years ago. In order to help you make the best starts & sits decisions for your fantasy team this week, I’ve used our NECC consistency rating to chart the safest and riskiest starts for Week 8.

I’ve charted running backs, wide receivers, and tight ends’ NECC rating over their .5PPR points per game to help visualize who are safe and risky starts this week. The chart is hard to read but never fear, I’ve highlighted a few high-risk, moderate-risk, and safe starts for Week 8 below. The colored bars highlight the median NECC rating for each position. (I’m still figuring out the best way to visualize all this data so bear with me.) 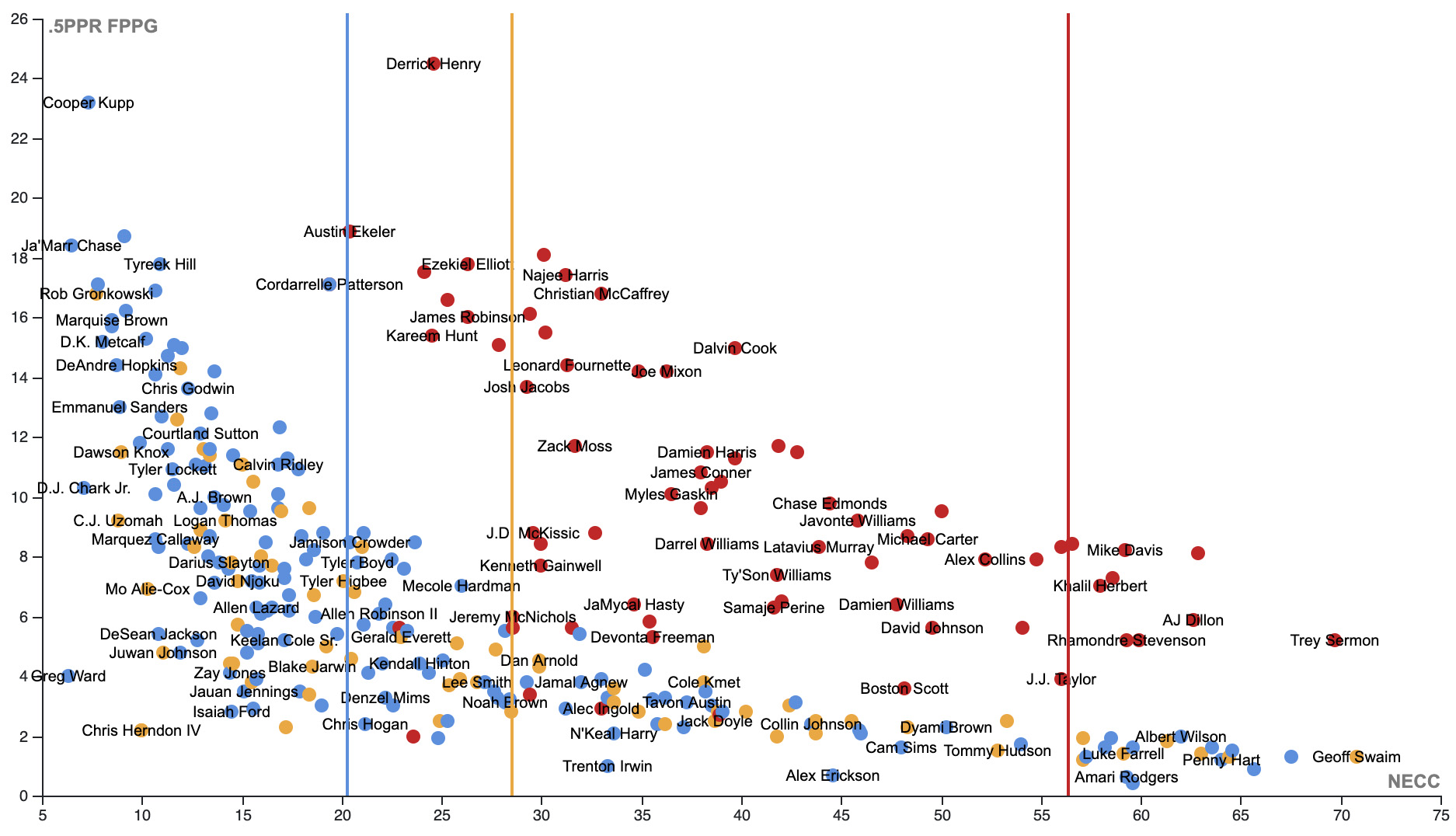 If you are a Mike Davis manager, chances are you weren’t planning on starting him anyway given his poor performance this year. I’m here to just confirm your choice. Davis’ NECC rating falls below the RB median and he ranks outside the top-70 backs this year in the metric. He hasn’t been consistent and he hasn’t been efficient. Not a recipe for fantasy success. This is doubly so when you’re going up against a Panthers’ run defense allowing the fewest RB FPPG this season. Carolina ranks 11th in NEFF run defense rating, allowing 110.3 rushing yards per game, 13th in the NFL. Please don’t start Mike Davis. (Please don’t roster Mike Davis anymore.)

The Bengals’ offense has rightfully been getting a ton of press recently. Joe Burrow and Ja’Marr Chase have been lighting it up and C.J. Uzomah has quickly become a household name. Tee Higgins managers can get excited over the 21 targets he’s seen over the last two games. However, this all isn’t great news for Tyler Boyd managers.

Boyd barely ranks inside the top-100 WRs in terms of NECC. Despite seeing the second-most targets on the team, it’s clear Boyd isn’t doing a lot with the work being directed his way. It’s a tough matchup for him as the Jets defense is giving up the third-fewest WR FPPG and second-fewest receptions to wideouts.

After a bad Week 1, Harris has quickly cemented himself among the RB-fantasy elites. He’s the RB8 in .5PPR scoring and scored a touchdown in three straight games heading into the Steelers’ Week 7 bye. Harris however isn’t the most efficient back with his touches, mainly because the Steelers load him up with touches and their offensive line is less than good. Among the RB1’s only Joe Mixon has a lower NECC rating.

Harris gets a tough matchup this week against the Browns. Cleveland boasts a top-5 ranked run defense and are allowing the fifth-fewest RB FPPG to go with it. I’m trusting Harris to get the job done and still finish a solid fantasy start this week. But he can be inefficient and against a good run defense, you hope he gets the touches he needs to provide solid return.

I was actually surprised this week to see how high Metcalf still is in terms of NECC rating. Among wide receivers who’ve played at least five games, Metcalf ranks fourth, just behind Ja’Marr Chase, Cooper Kupp, and Mike Williams. That’s the elite of the elite. The Geno Smith experience certainly is worrisome as the Seahawks’ offense has come to a complete standstill with him under center. I’m still confidently playing Metcalf as a WR2 this week against the Jaguars’ bottom ranked pass defense, Geno warts and all.

Alie-Cox has almost as many touchdowns over the last four weeks as receptions. He’s caught 10 balls since Week 4 and has scored 4 touchdowns. I understand that usage is highly volatile but he’s managing to do it on a weekly basis. It’s why he ranks a top TE in NECC rating.

Now we might see the volatility on display this week as the Titans have been one of the best teams at limiting TEs this season. They’re giving up the fifth-fewest fantasy points, third-fewest yards, and fewest yards per target to the position this year. Alie-Cox leans much more towards a high-risk start and a safe start this week.

I’m going to look really foolish this week if Gainwell does a whole bunch of nothing against the Lions. I’ve been hyping him up everywhere and it’s hard not to.

Even with Miles Sanders healthy, the Eagles were trying to get Gainwell the ball. The rookie running back has been one of the most efficient running backs this year in terms of NECC rating. It only makes sense that his fantasy production will increase with an increase in touches. Added bonus is he gets to see this workload increase against a Lions’ run defense is giving up the fifth-most RB FPPG. In my home league, I’m confidently starting Gainwell as a RB2 this week.

It’s been an incredible season for Sanders from both an NFL and fantasy football standpoint. Sanders ranks a high-end WR2 in .5PPR PPG and is eighth in NECC rating among wideouts who’ve played at least five games. He’s getting looks and putting up consistent numbers with them. He’s a potential smash start this week as the Dolphins are giving up the third-most WR FPPG. At the very least, he should be in your lineup confidently as a high-end flex option.

I’m pretty sure I highlighted Henry last week too but I don’t care. Not only is Henry one of the most consistent and efficient fantasy tight ends, he’s also playing in a revenge game. That’s right people. I’m all about that revenge narrative. Oh, and the Chargers are giving up the second-most fantasy points to the position. This feels like a week in which Henry easily finishes a top-5 TE.