Dallas Goedert is primed for a big week. Using NECC consistency rating to identify the riskiest and safest starts for Week 5 fantasy football.

There’s always risk in fantasy football. You’re never certain in the performance you’re going to get from a certain player when you start them. Even Cooper Kupp occasionally has a bad game. (But like, just once.) In order to help you make the best start/sit decisions for your fantasy team this week, I’ve used our NECC consistency rating to chart the safest and riskiest starts for Week 5.

I’ve charted every position’s NECC rating over their .5PPR points per game to help visualize who are safe and risky starts this week. The chart is hard to read but never fear, I’ve highlighted a few high-risk, mid-risk, and low-risk starts for Week 5. Feel free to do your own digging with the stat and use it when making your own start sit decisions. 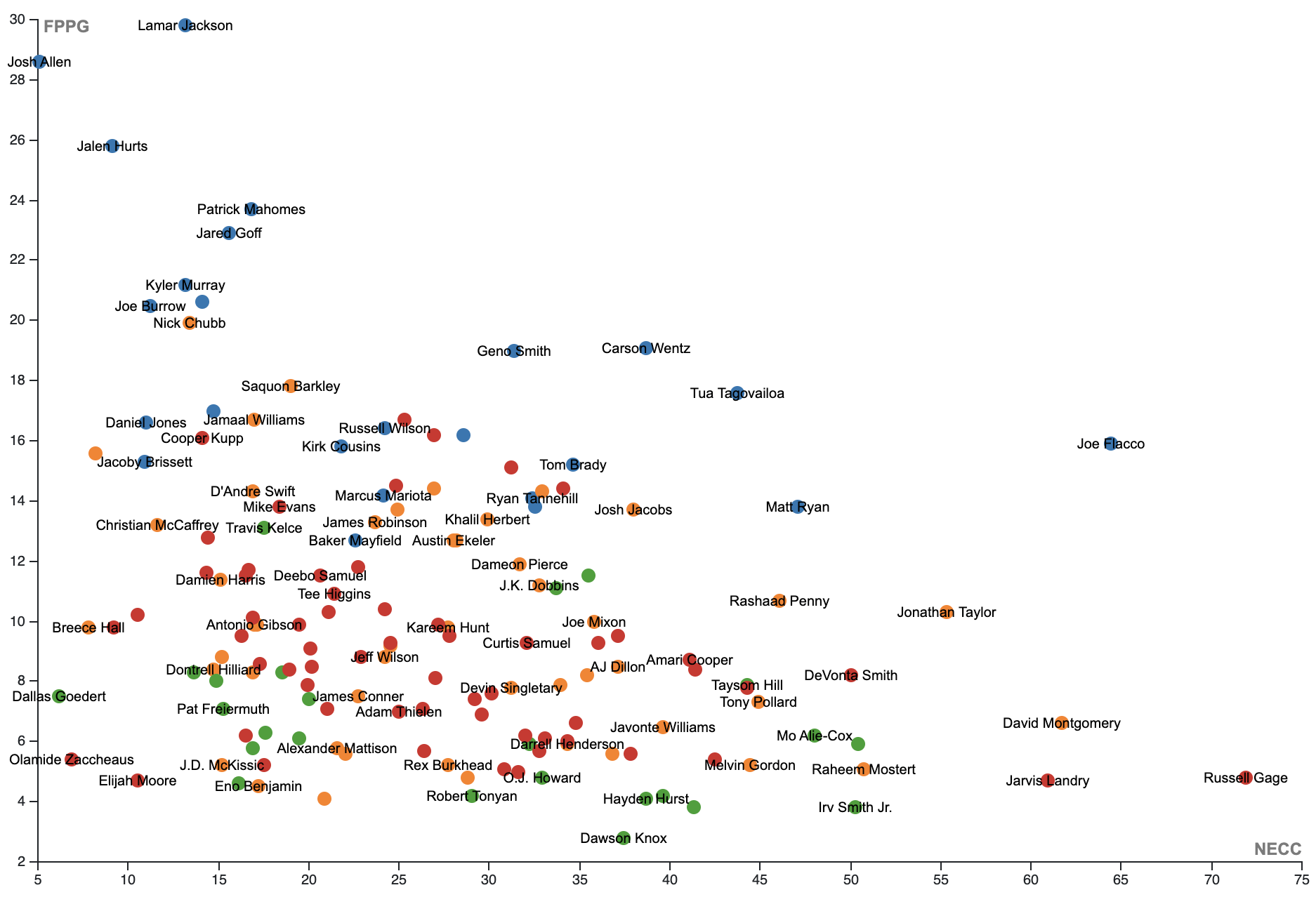 The struggles of Kyle Pitts to start the year have been well documented. The Falcons’ tight end has one of the worst NECC ratings at the position. You can blame that on his Week 3 performance against the Seahawks in which he caught 5 balls for 87 yards. Without that game, he’d likely a much better NECC rating, but just because he’s been so consistently bad. Outside of Week 3, Pitts hasn’t had over 2 catches or 25 yards receiving.

The Buccaneers defense has been a plus matchup for tight ends this season. Tampa is giving up the fourth-most points per game to the position (15.2). You drafted Pitts as your TE1 so unless you’ve already moved on, or got a top option sitting on your bench, you’re likely going to be starting him no matter what. Still, you’re not feeling good about it even in a plus matchup.

Penny is coming off easily his best game of the season in which he eviscerated the Lions’ defense. Penny racked up 151 yards and 2 touchdowns on 17 carries in Week 4. Prior to that, Penny had 141 yards and zero touchdowns on 32 carries. That’s total through the first three weeks of the season.

Things are already questionable for Penny this week as he’s dealing with a shoulder injury. Even if he does suit up for Week 5, he’s a risky start going against the Saints. New Orleans has been one of the best teams in the league at limiting opposing RB production. They’re allowing the sixth-fewest points to backs, just 16.2 per game.

Smith has given you both absolute highs and utter lows so far this season. In Week 1 he saw four targets, catching none of them for no points. In Week 3, the caught 8 balls on 12 targets for 169 yards and a touchdown. Two wildly different stat-lines. As you can see in the chart above, only Jarvis Landry and Russell Gage have been less consistent and efficient among WRs this season.

While the Cardinals have one of the worst pass defenses in the league—27th per NEFF rating—they have been stout against opposing wideouts. They’re giving up just 24 points per game, 7th best so far this season. Smith clearly has WR1 highs, but he’s hard to trust on a week-to-week basis.

Starting Burkhead may feel like a desperation play to many, but the veteran back is almost dead-on 50th percentile in terms of NECC rating. His role may be small—nothing more than a RB4 play—but he’s produced at that level fairly consistently to start the year. It makes sense as Burkhead has seen at least five targets in all but one game this season. He’s also a top-15 back in PER rating, averaging 0.87 points per touch.

On paper, a matchup vs the Jaguars doesn’t look great as Jacksonville boasts a top-5 run defense per NEFF. However, they’re giving up the second-most receiving yards and receptions, and third-most targets to backs this season. The passing game is where Burkhead makes his money and he feels like a sneaky start this week in deeper leagues.

Cousins falls directly in the middle of quarterbacks in terms of NECC rating. Out of the top-24 fantasy QBs, Cousins ranks 12th. He’s thrown at least a touchdown and 220 yards in every game this season, even in his primetime dud vs the Eagles.

The Bears are not an easy matchup, allowing just 181.2 yards per game passing (2nd in league) and 15.8 fantasy points (12th) to opposing QBs. You can attribute some of those numbers to playing Trey Lance, David Mills, and Daniel Jones so far this season. Aaron Rodgers put up 234 yards and 2 touchdowns on the Bears in Week 2. I feel pretty confident Cousins will get you fringe QB1 numbers this week.

Man, the work is there for JuJu. The new Chiefs’ wide receiver has seen eight targets in all but one game this season. Still, that hasn’t amounted to huge fantasy production. He’s only gone over 80 yards receiving once this season and has yet to catch a touchdown. He ‘s flirting with being a high-risk start, but currently is on the right side of the line.

The Raiders’ pass defense ranks 31st per NEFF and are giving up the 10th most points per game to wideouts. Given his relatively consistent target share in a plus matchup, this could shape up to be a good JuJu week.

There is currently no tight end more consistent or efficient in fantasy football than Dallas Goedert. In fact, Josh Allen is the only player at any position to have a higher NECC rating through four weeks. Goedert has had at least 3 catches and 60 yards in all but one game this season. And in that lone game he scored a touchdown to makeup for it.

Goedert managers should be licking their lips this week. The Cardinals rank 31st in points allowed to opposing tight ends, giving up 16.5 per game. Rankings guru Nic has Goedert ranked the TE4 this week. I don’t see how he doesn’t hit at least that.

The Dolphins are allowing the fifth-fewest in fantasy points to backs, giving up just 15.9 per game. I can understand how that might make Hall managers worry this week. However, Miami’s run defense ranks 27th per NEFF and have given up 15+ .5PPR points to lead backs in each of their last two games.

While Hall has yet to have his true breakout game, no back has been more consistent and efficient this season. Even in what appears to be a tough matchup, Hall has proven he can get you high-end RB2 numbers week in and week out.

While the Broncos offense as a whole has taken a while to get on track, Sutton has hit the ground running. The Broncos wide receiver has either scored a touchdown or gone over 70 yards receiving in every game this season. He’s clearly Russell Wilson’s go-to target, seeing a 26.7% target share (9th among WR).

The Colts secondary isn’t allowing much to wide receivers to start the year, just 20.5 points per game (4th). However, they rank 14th in red zone points allowed, a space where Sutton can do damage. He’s currently tied for fifth among receivers in red zone targets this season (6). He’s a confident WR1 start.